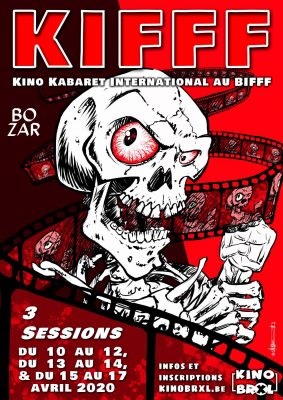 After a resounding success in 2019, the nonprofit organization KINOBRXL comes back in 2020 with a new international Kino Kabaret in BOZAR: during three sessions, thirty participants (both amateurs and professionals) per session will shoot a short film in 48 or 72 hours’ time.

Kino is an international cinematographic movement with the mantra: “Do good with nothing, do better with little, but do it now.” The movement started in Montreal in 1999 and has more than sixty branches worldwide. For more than twenty years now, meetings have taken place with amateurs and seasoned film lovers.

Kino wants to offer an alternative to the classic production route by giving young filmmakers the opportunity to not only shoot their project but also show it on the big screen. Some Kino Kabarets offer the participants professional material and guidance in their projects. Kino, that’s getting by, that’s creativity and passion, that’s collaboration.

Production meeting on the 13th of April at 10 a.m.

Production meeting on the 15th of April at 10 a.m.