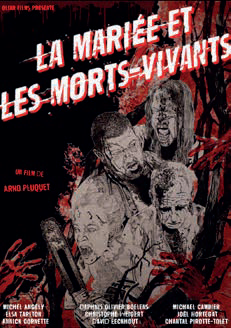 Jean Barreau leads a secluded life in the French countryside. He’s the leader of a spiritual
commune for tormented souls, whom he promises a shot at a new life. One of the first guests is
Camille, a thirtysomething who wants to start all over again. When shortly afterward, her double
shows up, she knows she should take the charismatic man at his word. But then the capricious
Jean starts ques- tioning his own beliefs… With his debut

EGOISTE (2015), Flemish filmmaker Jelle Stroo gave us a first sample of his talent. It did not
exactly go unnoticed since it was se- lected for the Beijing Film Festival. His latest effort LA
DEUXIEME is a sultry psycholo- gical thriller with fantasy elements. Stroo obviously is more
concerned with strong performances and an organic rhythm than with special effects and other
pyrotechnics.

Since a month now, the apocalypse is roaming through the country and ac- cording to some high
placed sources the Belgian population is infected with the “Z” virus! A deadly and unknown di-
sease… Despite the omnipresent danger and the fact that the entire Walloon po- pulation is heading
for the grave, Berna- dette and Serge decide against all odds to organize their wedding
reception. After all, it should be the best day of your life! Surviving until the famous wedding
ga-

teaux will not be a piece of cake, though… He shoots films at an incredible pace, with each title
speaking to the imagination: PA- PILLON NOIR, LA CARAVANNE DU CAFARD (Black Butterfly, The
Cockroach Trailer) or CA TOURNE PRES DE CHEZ VOUS (It’s Being Filmed Near You). Arno Pluquet
tackles his beloved Wallonia again with tons of black humor, which is the only thing guaranteed to
survive the apocalypse!