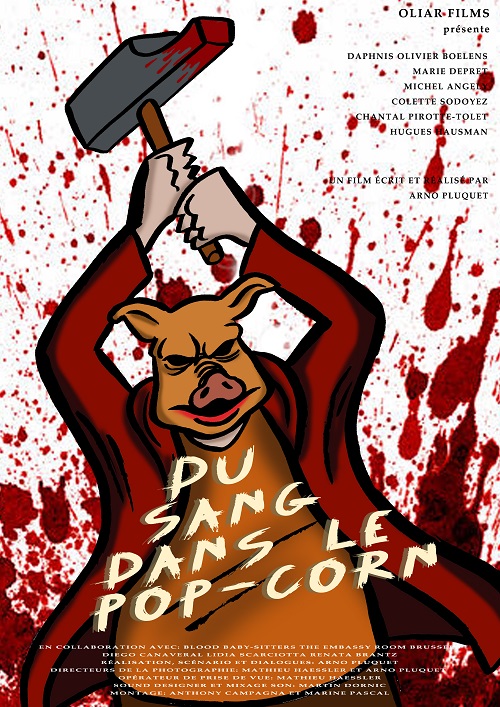 Bob and Rosalie live in a world where people look crazy and act even crazier than they look. The only escape in this crooked  society is a local pub and its underground rock scene. Bob, oppressed by his conspiracy-theorist mother (beware, cats are aliens in disguise!), uses a hitman with a pig mask in order to drink the blood  of young girls to protect himself from a mysterious virus. And Rosalie? Well, having lost all faith in God and living with her father and chain-smoking grandma, she  teams up with ‘the butcher’ in order to eradicate all of mankind. And you thought ERASERHEAD was fucked up! After LA CARAVANE  DU   CAFARD  and   LA

MARIÉE ET LES MORTS-VIVANTS brace yourself  for a new piece o’ meat from  the Pluquet pigsty. It’s Fear and Loathing in Wallonia’s Chainsaw Massacre (which might’ve been the working title). Arno Pluquet is back at the BIFFF with a darkly comic horror flick based on his short film LE BIBERIUM. He  treats  us to  an experimental  journey  through  a Gilliam-inspired dystopia infused with MAN BITES DOG’s  biting  dark  satire and  immaculate black ‘n’ white photography. If you come to the BIFFF for  the  monsters,  blood  and  scares, but also wonder about the Meaning of Life: come and join us. We brought the popcorn!