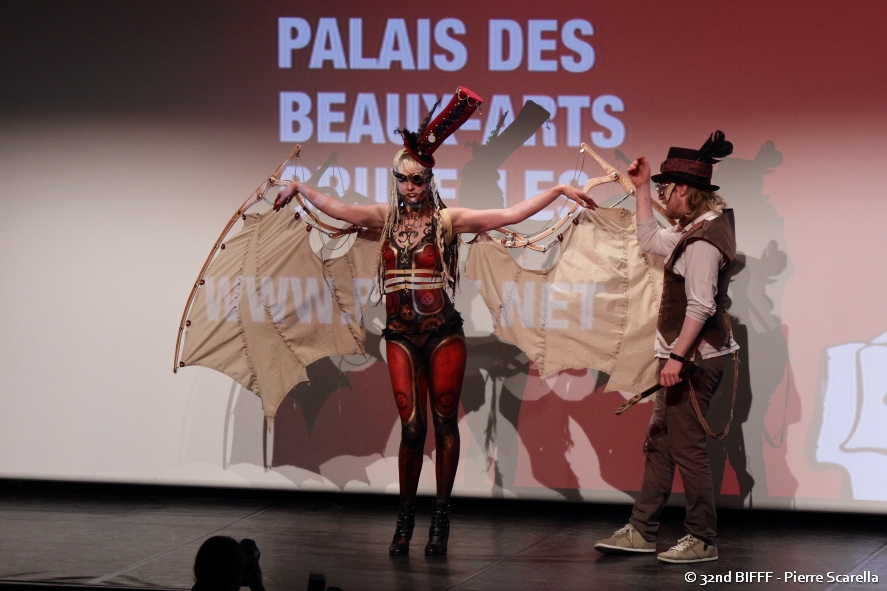 The 8th edition of the BIFFF Cosplay Competition and the EuroCosplay selection “Batman, Sailor Moon and Mario walk into a museum” might sound like the beginning of a joke but that is just what might be in store for you if you attend the Cosplay competition hosted at the 32nd edition of the Brussels International Fantastic Film Festival. On 13 April, in addition to the hoards of movie lovers, the elegant hallways of the Center for Fine Arts – Bifff’s new home since 2013 – will also welcome many colorful Cosplay practitioners. Cosplay originates from Japan and consists of paying homage to a fictional character from a movie, video game or comic ( both western and eastern ) by recreating and wearing the characters costume and recreating their look. But do not think this is some ordinary fancy dress party. We’re talking about carefully handcrafted and highly detailed costumes with according hair styles, make-up and even weapons and accessories. While sometimes accompanied by plying scenes from the comic, game or film, most of the attention is centered on the costume rather than on the interpretation. “Kawai”, as they say ! While Japan can be considered to be Cosplay central, with many competitions, conventions, festivals and even street parades, the first cosplayer was actually an American. In 1939, Forest J. Ackerman, author, director, scriptwriter and creator of the cult-comic Vampirella, attended the SciFi Convention WorldCon dressed up as “future man” and thus became the pioneer of a trend that is now sweeping the globe ! Since then, Cosplay has also found its place in “the old world”, with countries like France, Germany, Russia and Italy hosting events where Cosplay shows are watched by tens of thousands of people ! Belgium can stand proud on the international cosplay scene with an ever growing and vibrant community. That’s why we’re thrilled to welcome the 8th edition of the BIFFF Cosplay Contest. In addition to being one of the oldest running Cosplay competitions in Belgium, the festival will pick one lucky cosplayer to represent Belgium at EuroCosplay London. About 40 selected participants from 18 European countries will compete at the grand final at the end of October in London for the title of European Cosplay Champion! So join us on Sunday 13 April to cheer for our Belgian Cosplayers and for a chance to meet your fictional heroes in three dimensions!