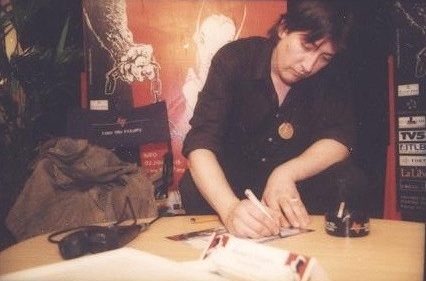 They already have their cameras on the shoulder and are ready to render the Capital even more fantastic than it already is. Students from the Rits and Narafi film schools will be given the duration of the festival to shoot and edit 3 short films, which will be presented to the public of the Passage 44 on Friday March 28th at 17:00 (free screening).
As for each year, they will be provided with professional equipment and staff, from the students of Jean-Pierre Finotto’s make-up school to numerical editing consoles, provided by the special digital effects company Cine & Fx.
A renowned director will be helping them in their task during shooting and editing. A scenario week-end has already taken place in early February, where the last corners of the scripts have been softened.
South African director Richard Stanley has taken up the challenge to conduct this year’s operations. As director of two cult films par excellence – Hardware and Dust Devil – Stanley has gained a reputation among underground film buffs, thanks to his bizarre imagery that commentators sometimes compared to the style of Dario Argento. But this reputation didn’t prevent him from experiencing harsh relationships with the heads of the Hollywood studios, who were for the least disappointed not to find in him the gentle rip-off maker they were looking for. Ultimately, this situation lead to his eviction from the set of “The Island of Dr. Moreau” that Stanley was due to direct. His vision of Wells’ novel, of which he intended to render the cruel and baroque atmosphere, frightened the producers to the point that he was laid off after 4 days of shooting.
Finally, thanks to United International Pictures, one student will be sent to London, where he’ll be able to follow the Short Course Unit of the NFTS (National Film & Television School).
With the assistance of the Flemish Community Commission of the Brussels Capital Region and U.I.P..
With the collaboration of the film schools Narafi and RITS, Jean-Pierre Finotto’s make-up school, , Bulterys & Locaflash, TV-Brussel, Cine & Fx and the Short Course Unit at the N.F.T.S.