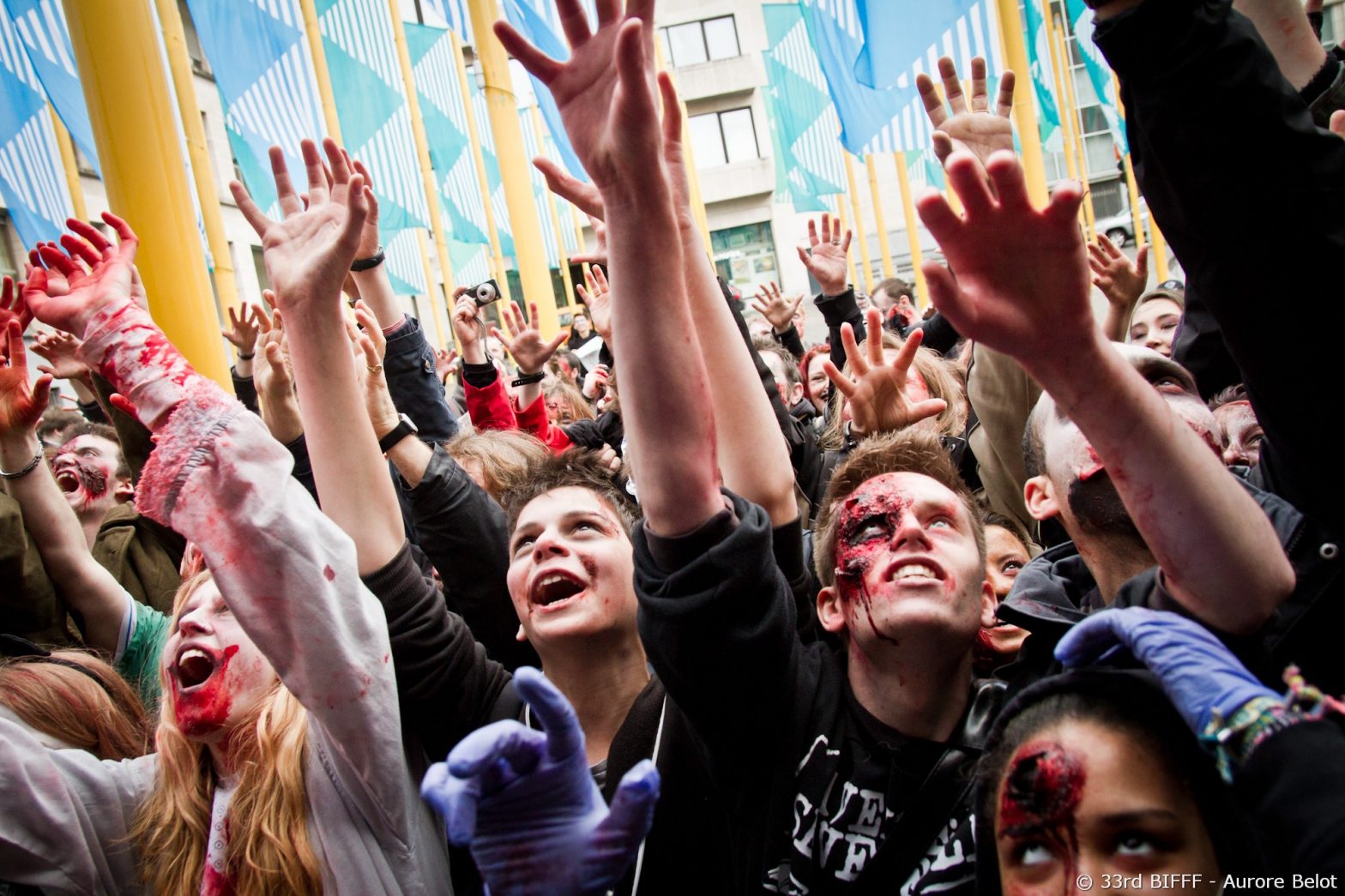 SPINAL CORD THROWING
Power, concentration, courage … the participating zombies will need all these qualities to finish this discipline.
You need more explanation? Really?
You take the spinal cord and you THROW it as far as possible in front of you. Try not to lose your arm while throwing…

RUNNING
A simple discipline. You only have to run 100 meters. And because we’re so nice, we’ve even reduced the number of meters to run.
One has to realize that not all zombies are bitten equal. If some are as fortunate to be more or less in one piece (or seem to be), others are a lot less lucky: a leg or two torn off, intestines hanging out, no eyeballs (but can zombies actually still see something?), a half-eaten arm… But don’t worry. It’s just a few meters, you’ll manage.
The discipline starts with a roll of the Dice of Destiny. This will determine which part of your body you’re not allowed to use during the discipline. Fingers crossed it’s going to be your arms!

INTESTINE PULLING
A miserable, screaming human (that seems to be hugely motivating) with its intestines hanging out, is the stake of an argument between two rival zombie teams.
Six on one side, six on the other side and a cord of intestines… which team is going to get to eat him?
A trial of force to be completed by an entire team of competing zombies.
Please show some understanding for the miserable, screaming human. You’re playing with his intestines.

ATTACKING HUMANS
The participating zombies are hungry and what do you know? A bunch of yummy humans are at the other side of the field.
But chances are they’re not going to be very cooperative. Armed with stones, they’ll try to push back the advancing zombies. Every time a zombie gets hit, he has to go back to the starting line. Will the zombies be flexible and agile enough to avoid getting stoned?

REGULATIONS or how to behave like a good zombie
It goes without saying that all disciplines must be completed in a true spirit of fair play. Zombies HELL YEAH, but well educated zombies!
Every infraction to the rules can be sanctioned by the jurors at each discipline.
Sanctions can go from a simple loss of points to total, complete and irrevocable disqualification from the competition.
We ask you to:
Respect the other teams…
… and also respect your own team members! A bought friend is also a friend for life…
Do not bite your opponents.
Be nice to the jurors (biting the jury may lead to disqualification!)
Respect basic decency rules (we know it’s difficult, but the King is just across the street!)
Do not throw your garbage, intestines, maggots or rotting limbs on the ground or at your opponents and certainly not at the jurors and the MC’s.
Realize it’s just a game. A sane mind in a healthy body is fine… but in a decaying body is even better, don’t you think? Once again, Cheap Satanism Records and Café Central join forces for a rhythmic limb swinging ritual at the 5th ZomBIFFF Night. This year the party kicks off under an occult sign with the presentation of the latest albums by Alos and Solar Skeletons. Alos is the brainchild of Italian performance artist Stefania Pedretti, who has no equal in bringing her audience into a diabolic and Machiavellian trance. The duo Solar Skeletons are true apprentice-sorcerers, whose spells consists of audio-explosions that are going to knock you out. If there are still some undead alive after all that, Agent Palmer, dDash en Tzii will deliver the final blow with some diabolic spins to the turntables.

By the way, Café Central extends the ZomBIFFF Night by inviting you every Sunday evening in April to watch a zombie movie at the occasion of their habitual movie-club evenings. Entrance is also free. This year they’ll try to answer the question that is haunting every decaying brain: can zombies have romantic adventures or are they doomed to rot away watching Oprah Winfrey reruns?!