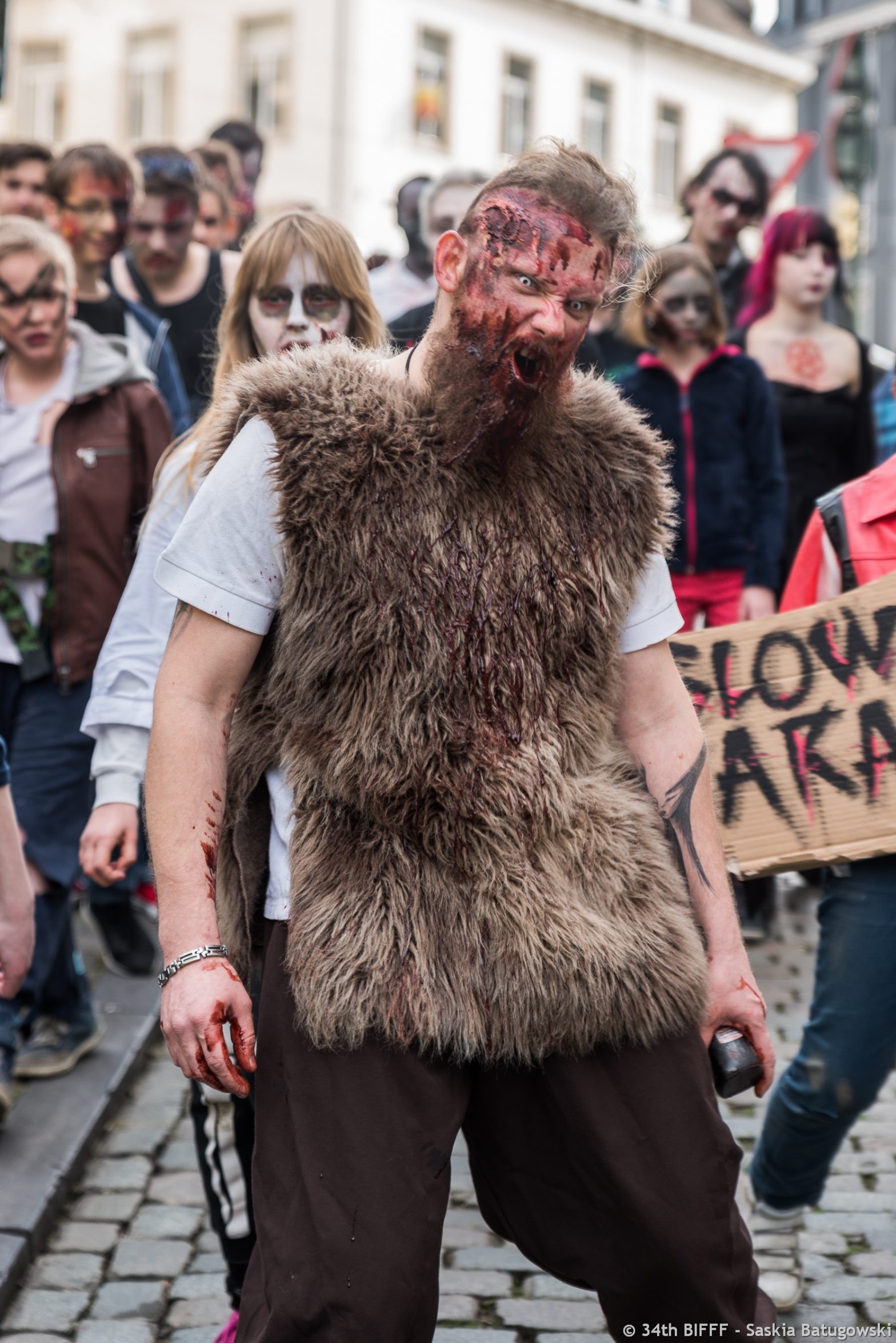 For all those who prefer life at a leisurely pace, there’s one walk you cannot afford to miss. The ZOMBIFFF PARADE will once again welcome hundreds of zombie-fans for something different than all the protest marches against the manifold disasters that ravage the planet. And our favorite little statue, Manneken-Pis, for the occasion dressed up as Drakulen-Pis, will send liquid greetings to all the jolly undead passers-by.

Those who’re not capable of making a bloody mess of themselves can come to the Royal Parc at 11am to get made-up for free by the dream team of Georges Stevens! And if some of you are interested in joining his team, just send a mail to: stevgeorges@hotmail.com !

Where, Parc Royal (in front of the Royal Palace).

PRICE: 3€ per player paid on the spot on the day of the event.

Number of players: 6 per team

Registrations will have to be mailed first to zombifff2016@gmail.com. Send us the name of your team and the names and surnames of your 6 zombies as well.

A team must have 6 players to be able to enter the competition. Should your team have an insufficient amount of flesh eaters, we have 2 solutions:

You have just arrived and you want to enlist? NO PROBLEM! Our Info Point stand will gladly greet you. Write down your zombie names and compete for the first prize!

Your team will also have the opportunity to have its picture taken, so you’ll have a souvenir of your pretty rotting face.

Activities will begin at 11.00 AM upon arrival of the Olympic Flame into the Royal Park. It will, of course, be carried by a zombie, so there’s no rush; you know how slow they are…

We’ll then begin with a quick warm-up for each team, so your bowels won’t (literally) spill out. A personal trainer will assist the teams and keep you warm. It would be a real shame to twist or lose your ankle…

The Zombifff’lympics 2016 closing ceremony and awards presentation will be at 3.45 PM

Starting at 4.00 PM, the surviving zombies will all gather for the parade, which will start at 4.30 PM!

Upon arrival: go to the Info Point stand to enlist your team!

Once registration and payments are done, each team will receive a card describing the challenges, which are:

Every point earned will go to the entire team. Be zombies, YES, but – most importantly – be team players! Every competing zombie will be judged by these 4 criteria:

After completing each challenge, teams will have to RETURN to the Info Point stand with their card completed by the jury, so that their points can be counted by the ULTIMATE JURY.

A real time ranking will be shown.

The team with the most points shall win the first prize, a beautiful brain made of Jelly!

Other surprises are planned for second and third place.

Strength, precision, bravery… the zombies will have to show these qualities to succeed the Spine Throw challenge.

This task is simple: run 100 meters. We’ve been really nice with this one, as we’ve reduced the race’s length.

But here’s the trick, we strongly believe not all zombies are created equal. If some of them are lucky enough to have remained (barely) functional through their journey, this isn’t the case for everyone. Some don’t have legs anymore or have their guts hanging out or their eyes were gauged out (but do they still keep their eyesight?) or one of their arms has been eaten … Don’t worry, you only have to run a short distance. Should be fine, right?

At the beginning of the challenge, you will have to throw the Dice of Destiny. It will decide which limb you will be deprived of during your run… pray it will only be your arm!

A defenseless and screaming (yes, it’s important, it’s our idea of a motivational speech) human’s guts are the object of a dispute between two zombie teams.

Six on each side, one “gutsy” rope… who will win?

A challenge that requires a combination of strength and teamwork awaits.

Participants are asked to be friendly and polite with the poor little human. After all, it’s his guts you just borrowed to fool around with.

The zombies are hungry and that’s perfect, because there’s a group of humans waiting on the other side of the field.

However, they aren’t the cooperating type. Armed with rocks and stones (AKA: Nerf guns), they will try to push the zombies back. Each time a zombie is hit, it will have to start over from the beginning. Will the zombies be agile enough to dodge the rocks? In any case: dinner is served.

We all know this for a fact: zombies are slow (except for Max Brooks, who doesn’t seem to know a thing about zombies). Which is why we would like to see who is the slowest of them all!!

This is a test that requires slowness AND stamina. Why stamina you ask? Wait… You actually think we’re just going to let you stride around the park? You may not know this, but not everyone likes zombies. So having some running a marathon is a good opportunity to show their dislike.

Other surprises are being prepared, but one thing is certain: if you’ve got what it takes, this challenge (which actually isn’t one…) is for you!!

Important notice: The zombie marathon isn’t part of the official Zombifff’lympics’ competition, which means your team will not win any points by partaking in this endeavor. It’s worth noting that in case of a tie between two teams, this marathon will probably help settle the score. It’s also worth noting that this is the only task for which you won’t have to buy friends.