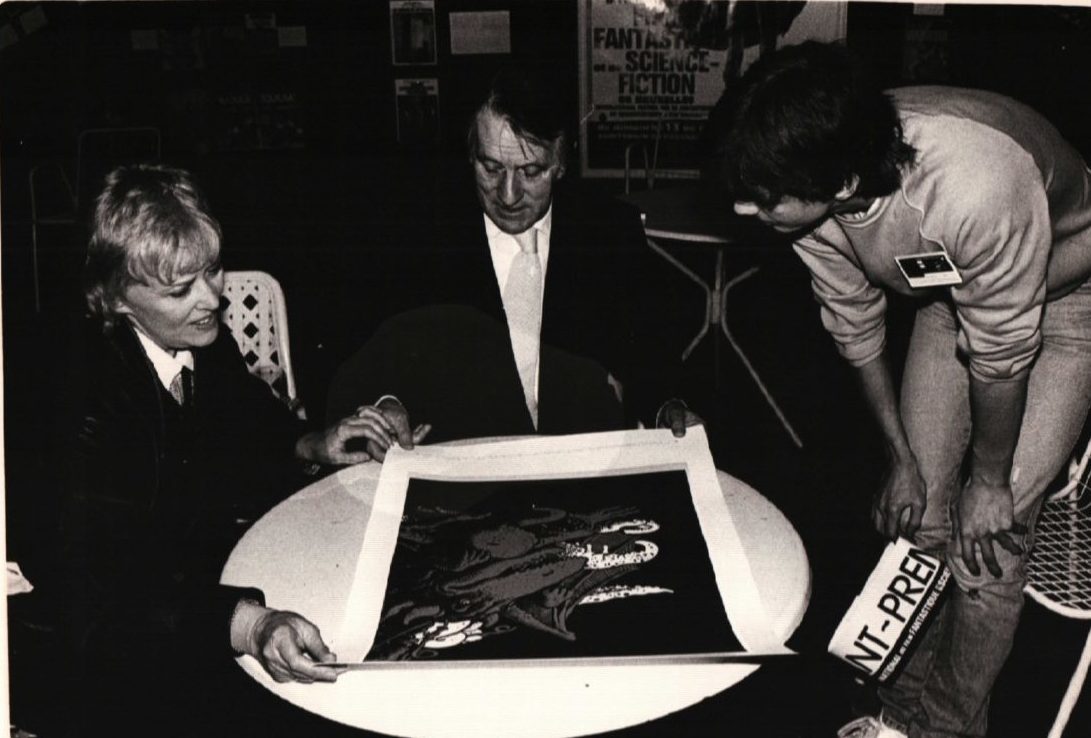 But where did the English fantastic film go?
Wasn’t it till recently a synonym for horror and the supernatural?
We think about the production organizations like Hammer and Amicus, important directors like Terence Fisher, Freddie Francis, Val Guest, Hitchcock, Don Sharp, John Gilling, Roy Ward Baker, Jack Clayton, James Whale,… (and then famous actors like Peter Cushing, Christopher Lee,… )
After an American period (1920-40), the English fantastic film retook its prominent place in (1950-1970). And it was only fair. Because eventually the fantastic imagination is rooted in England with Stevenson (Dr Jekyll and Mr Hyde), Shelley (Frankenstein), Caroll (Alice in wonderland) or H.G. Wells (Brave new world,… ).
And now in 1985 we present thirty public screenings and amongst them is only one English Film (The house of the Long Shadows)… WHAT HAPPENED?
While the last film of Terence Fisher (Frankenstein and the monster from Hell, 1973) was poor reviews by the public, the «Exorcist» by Friedkin (1973) returned to the spotlights of fantastic film.
It knew a tremendous success and today it represents 50% of the global business number in film industry.
The exorcist obviously illustrated the fondness of the public for shocking images but killed the English «gothic» film at the same time. The renaissance of fantastic film meant the demise of English fantastic film.
No more chiaroscuro, over with the dark, mythical characters, with obsessed scientists and baroque setting.
There is room now for a more emotional explicit cinema that no longer has room for the supernatural.
It’s a fact that the English fantastic film had disappeared. But does that mean the English gave up for good? We must be aware that their genius creativity is still present in fantastic and science fiction film. And if the United States is quantitatively stronger then the quality and diversity are still English.
First of all there is an old group, who without adapting themselves, still use old formulas in a humorous manner (Roy Ward Baker, with «Monster Club») or sufficiently use new technologies (Jack Clayton with «Something wicked this way comes»).
Second there are those who don’t want to wear the label of fantastic and science fiction film directors but are still the greatest representatives: Ken Russell (Altered States, The Devils), John Boorman (Zardoz, Excalibur), Lindsay Anderson (O Lucky Man, Britania Hospital).
Thirdly there are the directors from English descent but who work abroad: Michael Anderson (Dominique, Orca, Logan ‘s run), Michael Hodges (Flash Gordon, Moron’s from outer spaces), Gordon Hessler (The oblong Box, Scream and scream again),…
Then there are the actors who got famous doing fantastic and science fiction films: John Hurt (Elephant Man, 1984), Sting (Dune), or Oliver Reed (The Devils, The Brood, Burnt Offerings,. .. ) who without a doubt is the only one worthy of the title «Horror moviestar» and can bear the comparison with predecessors like Cushing, Lee, enz…
Following all the others: Donald Pleasance (N-Y 1997, Halloween, etc…), Julie Christie (Desmond seed, Memoirs of a survivor, Don ‘t look now), Robert Powell (The survivor, Harlequin), Terence Stamp (Superman, Company of wolves), Tim Curry (The Rocky Horror Pictures Show, Legend).
And last but not least there is the young generation of directors in whom we put our trust: especially Ridley Scott who with «Alien» and «Blade Runner» made the most exceptional films in years. And also his brother, Tony Scott (The Hunger), Harry Davenport (X-Tro), Neil Jordan (The company of wolves), Michael Radford (1984)…
Maybe they represent the beginning of rehabilitation for English fantastic and science fiction film.
Our retrospective has chosen a few films that date back to the golden age. They demonstrate that the English fantastic and science fiction film have adequately adapted to the evolution of the seventies.