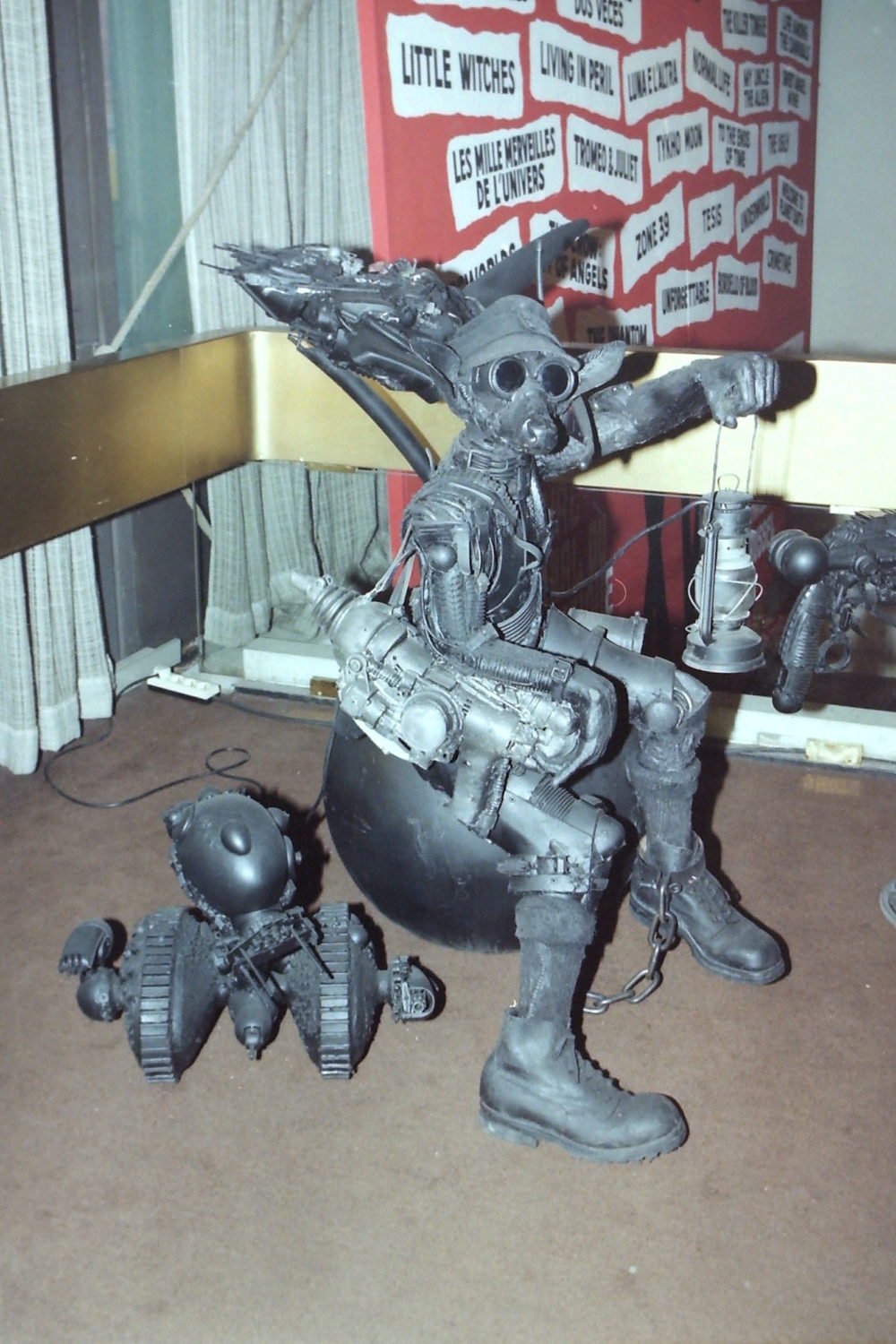 After a search of 3 years the collection “Humboldt-Fonteyne” is recovered in the basement of the Institute of Pathology of the Uhiversity of Krazgoyarsk.

Alexandre Humboldt-Fonteyne, bom in 1883. disappeared mysteriously in Lima in 1939. He left an impressive collection of zoological and teratological specimens.
This remarkable personality, discredited by his scientific peers, was obsessed by expeditions and the discovery of new species. From 1909 till 1939, Alexandre Humboldt
Fonteyne explores the most savage regions of Africa, Asia, Australia and South-America. He collects a massive amount of information and thousands of specimens of fauna and flora from these, then unknown, Regions. To archieve his objectives, he trusts in his good luck and on the oral traditions and the collective memory of the
peoples he encounters. Their indigenous, often naive stories, in which the represented animals develop all sorts of fantastic characteristics, are of great importance to him. Alexandre Humboldt-Fonteyne is convinced that the myth hides a part of the
truth.

He brings back some exceptional specimens from his numerous expeditions. Among them the mummited head of the Yeti, discovered in a libetan sanctüan. From a castle in the heart of the Carpathian mountains comes the skin of a giant bat. There are
the monstrous larvae, thanested in the mangroves of the Carpentarian Gulf. And there is the mysterious humianoid, found in a cave in the desert of Sonora, Mexico.

Many had their eyes on his collection, that was kept until 1939 In a country estate remained mysterious, the Nazi’s Seized the collection by the beginning of the war. The most interesting pieces were brougt over to Berlin, where they were secretly guarded for 4 years. After numerous complications the collection finailly surfaced in Krasgoyarsk, Siberia…

The collection “Humboldt-Fonteyne”, which was born out of the rich imagination of Michel A. de Spiegeleire, was exposed for the first time in the Art Cadia Gallery of hybrids in Brussels. The public could admire some twenty very real looking Sculptures of hybrids and fantastic creatures. There also was a catalogue that described the life and times of Alexandre Humboldt-Fonteyne.

Michel A. de Spiegeleire is an art historian and an archaeologist. For some ten years now, he is active in the world of museums. In 1988 he created the exhibition Dinosaurs Alive, of which the mecanised Dinosaurs enchanted thousands of children and adults. In 1992 he conceived the exhibition “Qin Shihuangdi, the immortal Emperor reconstruction of the tomb of the first emperor of China. In between exhibitions he restores whale skeletons, notably for the Grande Galerie de l’Evolution in the National Museum of Natural History in Paris

Michel A. de Spiegeleire is used to work within a rigorous scientific framework. He makes sure that his imagined sculptures look so real, that they provoke doubts in the mind of the spectator, This doubt is strengthened by the catalogue, which is full of seemingly precise facts.

“About flesh and iron” (by Isidro ROMERO)

My friend is a surgeon. At ER he struggles with broken bones. He
closes fractures and gets people back on their feet. He reanimates
lives that are hanging by a thread. With his hands, he dives up to his
elbows in the intestines and the blood of open bellies. He saws, cuts
and knits together.

He knows what Hell is like… and he can also create it.

He uses the cruellest and hardest matter : rusted iron and steel
plates, tramway rails, industrial scrap from the big presses with their internal rhythms, huge remains of old machine-parts, pieces of combustion engines,

He breaks it down, cuts it, integrates, mends and joins the fragments together. He turns it into memorable sculptures. They represent the human animal, victim of evil and hate, carrier of murders in its iron mineralness.

From what is weak and sticky, he has gone to what is hard and
mineral.

From blood to iron.

From the Scalpel to the blowtorch.

From fullness to emptiness.

From round comers to sharp corners, combined in its most cruel way.

Drives that are still perceptible, but already counted and temporary,

Through the monstrosity of industrial scrap, he makes man as he sees him, with everything that he lacks to be human in the city of man.

Born in France in 1951. He lives in Switzerland since 1978.
He studied at the Academy of Fine Arts in Besançon and at the Academy for Applied Arts in La Chaux De Fonds.
Since 1991 you can find him at several individual and collective
exhibitions at science fiction conventions in France and Switzerland.

He directs videoclips and designs sets for films, bars and cultural
centres. He also decorates a float and designs costumes for a carnival
parade.

“Jean-Pierre vaufrey creates a complex and visionary new world, that finds its origin in dark stories. With master craftsmanship he
constructs the contemporary outcast out of objects that are deemed unusable and destined for destruction. He gives them new life by the miracle of the impossible fusion of flesh, plastic and steel. With this he creates a disturbing
world, a logical and futuristic image of ours.

The body is sacrificed to the machine. The machine penetrates and occupies the body. It covers it
completely until the only thing remaining of the human entity 1s a
remembrance of form.

With Jean-Pierre Vaufrey, man and machine have at last found their
unthinkable osmosis.

And if there were a morale to this, it would not be advantageous for the former.

Seen from a distance, the forest looks fossilised. But its murmurs resound in us. The whispers of every individual tree, the heartrending lament of the bark, an eruption out of which emerge demons of a dubious and undecided sex, a bursting fig in the blue forest, a swollen women’s belly out of which something indefinable will crawl, a monster that sleeps since the night of time
in the vein of a leaf, a chirping of colour in the vanguard of silence, hairs of marble, a hand of a blind Cyclops, foam that is moist with blood, a petrified flower..
It is then that the chant of nature bursts loose, nature which resembles us. She holds up a mirror to us. She tells us who we are. She sings about time and our disease, the hope that resides in death.

In the blessed year 1971, in a lost corner of the United Kingdom, an adorable manchild was born.
She listened to the sweet name of Tegan. It was already late in the evening, but nevertheless three little fairies nestled themselves by her cradle. Each at her turn made a
prediction about her future and gave her a gift.

The first, completely dressed in white, told her this: “Sweet child, I
see that your father will become a wonderful storyteller. His stories
of monsters, pixies and ghosts will awaken a dormant passion in you. That is why I give you this invaluable collection of videotapes.”
The second, completely dressed in red, spoke the following words:
“Little one, I see that, by the time you have turned six, you will already gaze at the full moon with an expectant look in your eyes for all those vampires and werewolves… That is why I give you this Subscription to the Brussels Fantasy Film Festival.”

And finally the third one, completely dressed in black, spoke while she flapped with her wings: “Me, my angel, I see that if you are to be wise, one will have to give you what I am going to give you..”

She did not have the time to finish her sentence. Her life ended between a hard wait and a folded paper, squashed tike a common fily. Here, at the Festival, you will all be able to see what Tegan has
done with her gift. It is truly
amazing what one can make out of some moulding clay…

Art Cadia metamorphoses the bar of the 15th Festival of Fantasy Film into a time-space capsule. Encouraged by last year’s success, Jérôme Kaczmarski transforms the bar of the Passage 44 into a unique and magical place. This by using panels, drapes and portholes, decorated by the team of the Festival with effigies of the numerous Dracula’s that have haunted the silver screen. The capsule invites us for a voyage through time. It ends in 1897, date of birth of Bram Stoker’s famous novel “Dracula”.

A few words about Art Cadia…
A “fantastic” and very welcoming place. Art Cadia’s goal is to exhibit the very best in fantasy art in their gallery on the mezzanine. In its bar you will plunge into a universe where you can savour a delicious drink. This environment is designed to watch and drink with only one thing on your mind : “Fantasy”.

Possibility to enjoy a small snack.