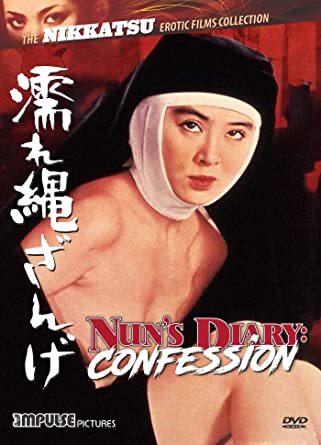 THE SEX DEMONS
Jess Franco, France/Portugal, 1972, eng. version,
35mm, 114’
Director Jess Franco’s X-rated rip-off of Ken Russell’s
The Devils blends torture with full-frontal nudity as the daughters of a condemned witch, burned at the stake before the Inquisition, infest the local nunnery with blasphemous sexual and satanic acts. One of the sisters even shows a talent for a “death kiss”, which literally turns men into cheap plastic skeletons.

SCHOOL OF THE HOLY
BEAST
Norifumi Suzuki, Japan, 1974, vo/ov eng. st, 35mm,
88’
A mind-blowing critique of Catholicism (Japanese- style) in the guise of an exploitation film. A young woman enters a convent to investigate the mysterious death of her mother. She soon discovers a pool of vice as she’s abused by lecherous archbishops, a lesbian mother superior and a line of fellow nuns ready to whip her with rosethorns! An unholy mix of lesbian sex, flagellation, fetishism, and political commentary is brilliantly fused in one outrageously provocative and visually stunning package.