Our beloved Festiv’art opens its doors for a retrospective of the winners of the last four editions of the Art Contest! They’re also presenting new work this year. Do you want to shiver of pure pleasure and horror, with so many beautiful pieces of art in many different styles to behold? Then you’ve come to the right place! Even better: it’s 100% Belgian!

BIFFF and Art Projects Pieterpauwel exhibit
the magnificent works of

Nathan has been drawing since forever. Throughout the years, after much research and work, he has created a universe filled with all kinds of species, with a very personal aesthetic.

Ever since his early childhood he’s had a strong passion for genre cinema, especially horror movies. Film is without a doubt his biggest influence, with literature and the arts in general.

Later on he got fascinated by the human condition, in particular its darker, miserable side.

His paintings are timeless, always with a certain humoristic touch. He works with form, light and texture.

Deformation is the name of his game, his images always mysterious and organic.

‘If life is beautiful, it is not meant to be taken seriously’ he says! 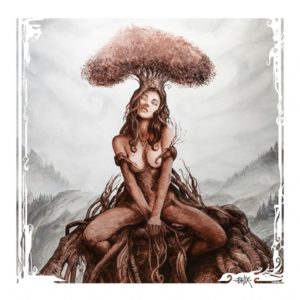 Palix is known for his aquarelle sketches of the major trials that have shaken Belgium since 2003 (Cools, Dutroux, Fourniret or more recently Salah Abdeslam, Nemmouche, the euthanasia case…). These courtroom sketches have been published in Belgian and international media and were showcased in the Grand Palace in Paris.

He’s also – and perhaps above all – an artist blessed with an unlimited imagination. He creates oil paintings that take you to a poetic, fantastical universe, rich in details that titillate our inner child’s spirit. His work is an invitation to freeze time and dream with open eyes…

Lan’s universe is a cross between fantasy, cyberpunk and science fiction, with a poetic, melancholic and a small touch of gloom. His style is strongly emotional and varies depending on what each artwork aims for. Bringing across a message? An impression? Or simply the look of a character, the charm of a creature … The most important thing above all is that everything is organic and coherent. So it’s not exactly art in a strict sense, it’s an open window to Lan’s dreams. 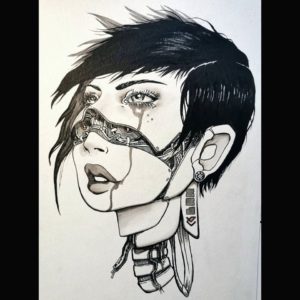 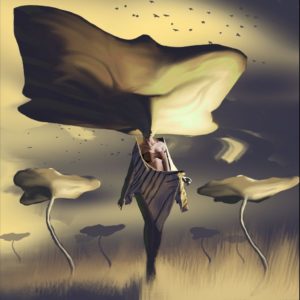 My name is Raphaël Vanhomwegen. I live in Brussels. I started digital painting in 2010 but really accelerated my learning curve in January 2019. Even though I studied psychology and human resources at the University of Ghent, I decided to make a career switch. I’ve always been interested in drawing. When I was a little kid, I could spend hours drawing little cartoon figures from Lucky Luke and other funny comic books. What I love the most about digital painting is the freedom it gives me to create anything I want in a very short time. Speed is the skill I value the most. It has become part of my identity and my philosophy. Focusing on speed also created a mindset in which decisions were a result of very deeply integrated knowledge and motoric reflexes. It exposes my biggest weaknesses, making it easier to identify them and therefore drawing better each time.

I love monsters! Enjoy the creepiness of my creations!

David Gueulette is born and raised in Brussels. He spent a couple of years at the university before focusing on the arts and his studies at the IAD (Institut des arts de diffusion) in Louvain-la-Neuve. At the same time he gets a divers degree. At 30 years old he decides to leave Brussels and installs himself in Han-sur-Lesse.

Create, invent, deconstruct and reconstruct… That’s what it’s all about for David and what it’s always been about since childhood. He will put all his know-how into his big passion: cave diving, a very technical and extreme sport, for which he will make dozens of objects. The flame for the arts that has always been burning within him would only grow: each object had to be beautiful and please the spirit. And that’s how, logically, he went from creating technical objects to pieces of art. That’s how he began creating metal sculptures, as a true self-taught artist. 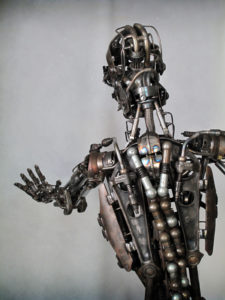 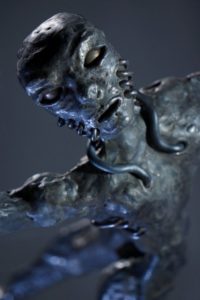 He’s always been passionate about the optimization of the human body and he would naturally apply that to his art. He presents humanoids that marry his mechanical know-how to the art of sculpture. His favorite material, you ask? Stainless steel, which he bends and tweaks into forms that are far removed of what it’s habitually used for. Tubes, rounds, placards and wires of stainless steel are transformed into bones, muscles and ligaments. His sculptures are made out of a combination of mechanical elements that, bent and wrapped in different types of imperfect skin, obtain a remarkably organic aspect.

His biggest source of inspiration is contemporary dance and sports. Movement is primordial. Anatomy, plastination, cybernetics and transhumanism define David Gueulette’s steel statues. At times organic, at times mechanic, often both and always imbalanced. A snapshot before the fall… 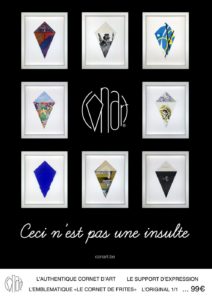