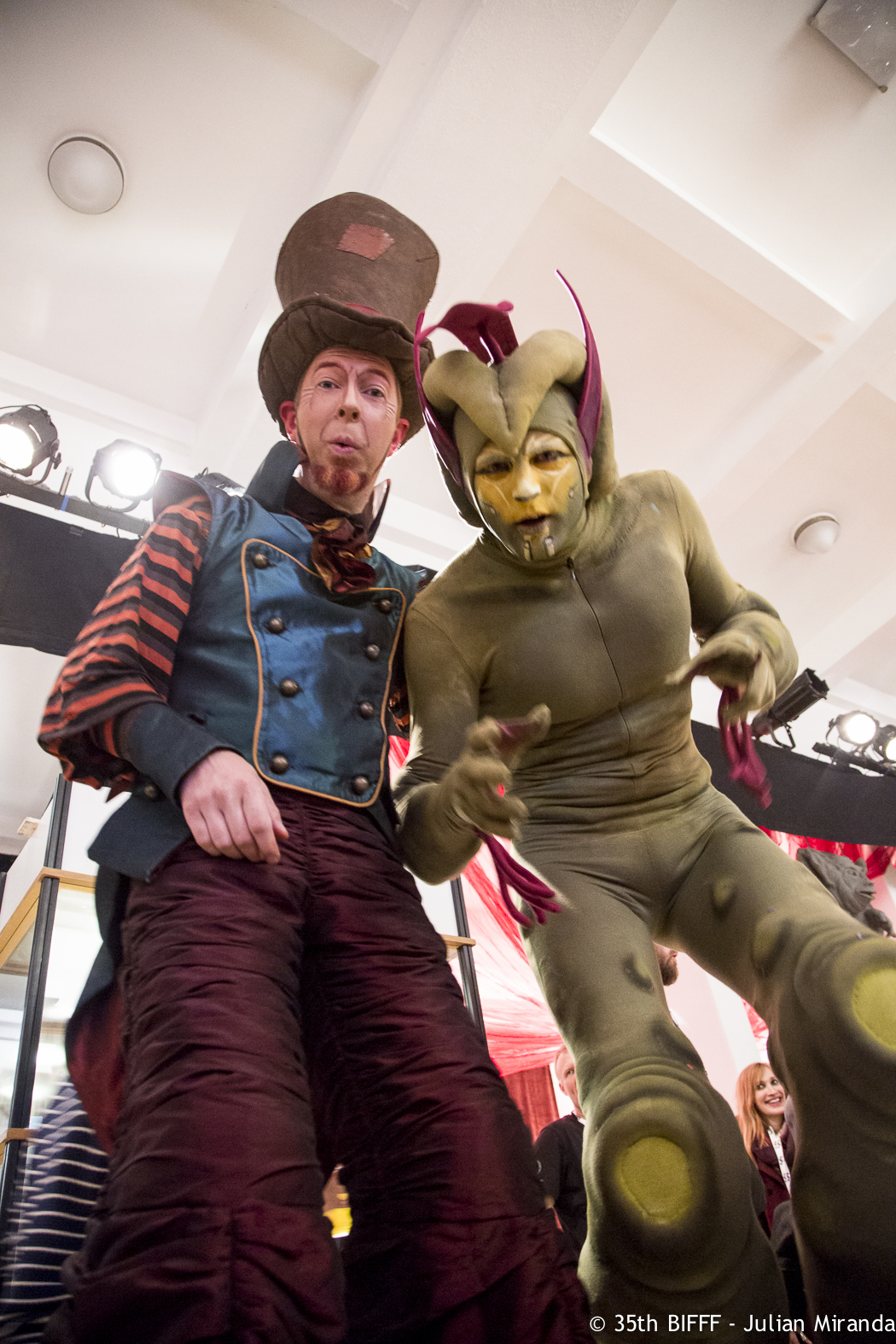 A dark man starts having electronic dreams after finding a mysterious shelf on the floor. But is he really dreaming? Surrounded by machines, robots and luminous artifacts, our hero will try to get out of his dream but will encounter mysterious beings on his way. A spectacle of color and lights!

Sproutch, a headless survivor of the Zinneke parade, stirs up trouble and fear wherever he goes. But, no worries, if you show him courtesy, he will surely offer you a little face time!

Demonus comes straight from hell. He will walk around looking for food, but what does he eat? Humans? Come closer if you dare and you’ll see!

Coco and Julus, 2 characters looking a bit crazy, welcome your guests in a wacky atmosphere. These characters will not frighten you. Come closer!

Archam, a great tamer of creatures of all kinds, has scoured all the oceans, climbed the highest mountains, and crossed the biggest precipices in order to find an Uruluki. For the first time on earth, do not miss your only chance to see this little fierce animal. He lets you come closer without fear. Follow Archam and discover who, the master, the animal or the public, is really tamed!

Too many victims succumbed last year to the techno-esoteric spells of Dr. Vibes’ ceremonies of shadow and light. This debauchery had to be stopped by the guards of the BIFFF.

But despite all the torches and pitchforks, our dear doctor believed that these attributes were part of a thanking ritual. It must be said that poor Vibes does not speak or understand any known language and parts of his brain have been outsourced to higher planes.

A performance by Gauthier Keyaerts, visuals by François Zajéga.

Mad Nulty is a super cop, a real one. As the worthy heir to Robocop and Judge Dredd, he has landed this year at the BIFFF to fight his worst enemy; the mutant Zardox! But this smart ass is hiding in the crowd. And Mad Nulty will have to count on the help of our spectators to find him. Come and join this insane mutant hunting party, full of monsters and improbable references, orchestrated by the animators of Kaernunos!

The wacky, crazy, Magic Land Theater troupe has been part of BIFFF folklore for years. Founded in 1975, the company has diversified its activities from puppet shows to television, but has always remained faithful to its first love: street art. Its actors, with their delirious and absurd humor, climb on their stilts and put on their wildest costumes to transform themselves into strangely fantastic creatures during the festival.

Our angry warrior has returned and this time the Predator has chosen Brussels as his hunting ground. BIFFF people beware, because you’re his new prey. Whether it’s for a photo or to see his hunting trophies up close, come and meet the Predator!

The Puck Company is back at the BIFFF! After intense reflection, the sacrifice of a dozen chickens (just because it’s fun), a liter of wine drunk for each liter of blood in the body of its members, the Pucksters decided to put themselves at the service of the BIFFF audience this year. Yes, they’ll be there for you! You could almost say that’s good news. Almost…

And… this year they’ll compete with the best zombies at the ZomBIFFF’lympics and they’ll lead the ZomBIFFF parade with their float which-does-not-have-a-name-yet-because-they’re-still-building-it-right-now.

Festival regulars Squid Lab team will be present. This special effects workshop based in Brussels will give a demonstration of costumes, makeup and prosthesis in the purest tradition of the festival. We won’t tell you more, it’s a surprise!

The monster is alive! Our extravagant mad scientist succeeded in bringing him back.

But something is not right in his head…

Monsters with 4 legs – The Beast and the Wolf

Don’t be afraid of these giant balls of hair. That is, if they’ve eaten enough, of course. Will you dare to approach them?