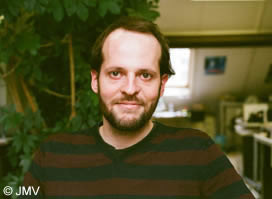 After studying journalism as well as analysis & scriptwriting at the university, Benjamin d’Aoust directs Mur, his first short feature, in 2006. The film tours around the world and wins several awards. In 2010, he shoots a second short, Point de fuite. He’s also active as film critic, an editor, an assistant director and a script doctor. He is currently shooting his first feature documentary, La nuit qu’on suppose, and is co-writer for the comic-strip Shrimp.