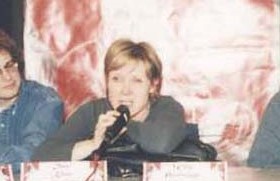 Before Vaya Con Dios, there was Dani Klein’s extraordinary voice, which could be heard on commercials, in bars, in a musical about the life of Jacques Brel and on albums of bands like Arbeid Adelt. But with Vaya Con Dios, she touched a nerve with music lovers all over the world. After five albums and countless performances, from the debut of the same name in 1988 till the compilation The Best of Vaya Con Dios in 1996 – with hits such as Just A Friend of Mine, Puerto Rico and What’s A Woman – they had sold more than 5 million albums and had received some 50 gold and platinum discs. In 1999 she founded a new band : Purple Prose. Besides the fact that we can once more enjoy her considerable vocal talents, she has also decided to join our European Jury.