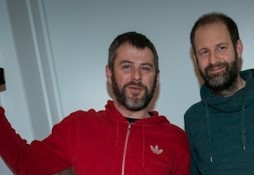 Olivier Imfeld, born in Switzerland from a Swiss mother and a Dutch father, left his native country after finished his BA., as he wanted to discover the world. He ended up in Arles, France. There, he studied photography at the Ecole Nationale de la Photographie and then moved to Nice for studies in contemporary art at the National School of Art. His first real contact with cinema in Switzerland (after seeing Mary Poppins as a kid) is when he works at an underground cinema, on the weekends. The free tickets he gets from this job are used for total immersion in the 7th Art. Then, during his photography studies, he’s asked to take pictures on a film set, which definitely gets him hooked on cinema. After his studies, he works on productions in the south of France, where he meets people like Armin Müller Stahl, Max von Sidow and Roman Coppola (scriptwriter of Wes Anderson’s The Life Aquatic). Olivier is chief operator and second team DOP on Ricky Bates Jr’s slasher Excision, shot in Los Angeles. His most recent feat is DOP on Jerome Vandewattyne’s docufiction Spit ‘n’ Split, which had its world premiere at the BIFFF and was nominated for the 2018 Magritte Awards.