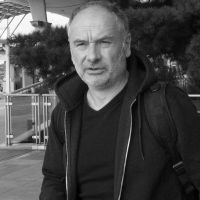 Director Pierre Vinour lives and works in Paris. From practising music since the end of the 70ties, he gradually passes on to directing experimental super 8 movies. In the nineties, Vinour realises several rewarded short films; Paris-Marseille, Les Scorpions and Millevaches, which is nominated for the Césars. After that, Vinour produces his first long feature: Supernova – Experience #1, starring Philippe Nahon and Catherine Wilkening which he will present us with producer Aurélie Bordier. His way of filming is more sensory than narrative, letting image, sound and human emotions interact. He wants the audience to penetrate into the inner core of the human soul. At this moment, Pierre Vinour is preparing his second long feature Magma, a thriller with espionage elements. The shooting will take place in France and Ireland during the spring of 2005. In the leading parts, we’ll recognize Tchéky Karyo, Bruno Wolkowitch and Julie Gayet.