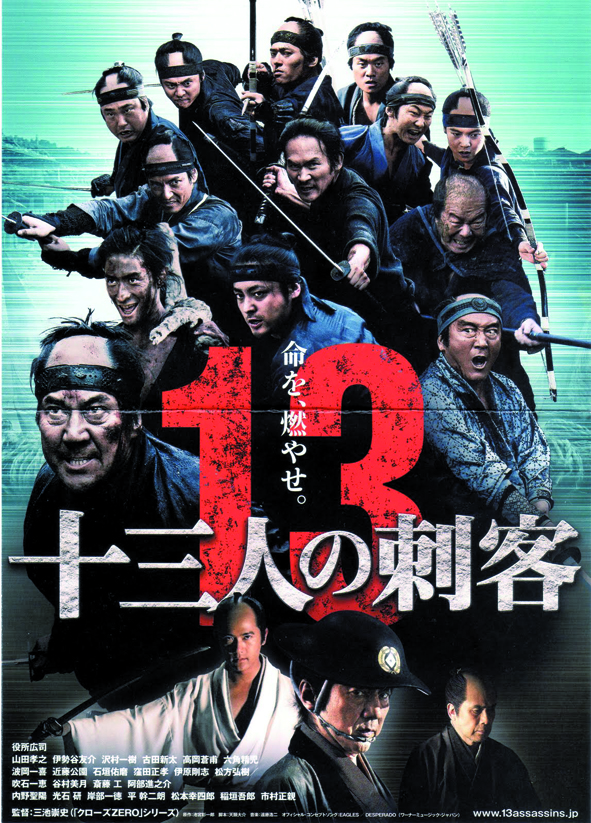 Japan, the middle of the 19th century. After more than two centuries of peace, the Shogunate has become a shadow of itself. The samurai are bored to death and spend their time drinking and gambling. Lord Naritsugu, the sadistic brother of the Shogun, murders and rapes without fear of being punished. He’s just a heartbeat away from the throne. Because of Naritsugu’s status, the honorable chamberlain Doi can not openly attack him. He asks Shinzaemon, one of the last true samurai, to assemble a team of 13 warriors for a suicide mission. To kill Naritsugu, you have to get pasts hundreds of bodyguards, who’re being led by an old friend of Shinzaemon. The thirteen manage to lead Naritsugu’s convoy to a small village where they have prepared an ambush. An explosive, bloody and hopeless confrontation lies ahead. Takashi Miike ( The Audition, Ichi The Killer, Zebraman ) is probably Japan’s most versatile director. With 13 Assassins, he has pulled off a magnificent mix somewhere in between Akira Kurosawa’s Seven Samurai and Robert Aldrich’s The Dirty Dozen. Do not expect an ironic genre homage like his Sukiyaki Western Django. 13 Assassins is one very serious samurai movie indeed, where honor is all that matters and where it’s better to chop off one more head just to be sure. The formidable Koji Yakusho ( Cure, Eureka, Babel ) would even give Toshiro Mifune a run for his money with his interpretation of Shinzaemon, the fearless leader of the 13 Assassins.