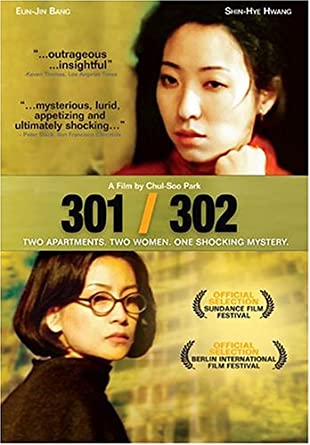 301-302 explores the mysterious disappearance of one of two women living across the hall from each other in a modern apartment complex in Seoul, Korea. The women, referred to by their apartment numbers, each share common yet dissimilar obsessions: eating disorders and problematic relationships with men. 301 is an amateur cook whose spare time is spent preparing and eating lavish meals, while her bookish and reclusive neighbor 302 becomes ill at the mere sight or smell of food. In a series of flashbacks, we see how the relationship between the two women develops and learn the shocking secret of what happened to 302.
Director Chul-Soo Park started his film-career in 1976. His film 301-302 was the first Korean film ever to get a world-wide distribution. This small bugdet film explores in an inventive way the psychological disfunctioning of two women living in the same building. It’s about beauty complexes, diet failure, painful love affaires and women dealing with a man-oriented society. A shocking feminist thriller that will change forever the way you’re dealing with food.