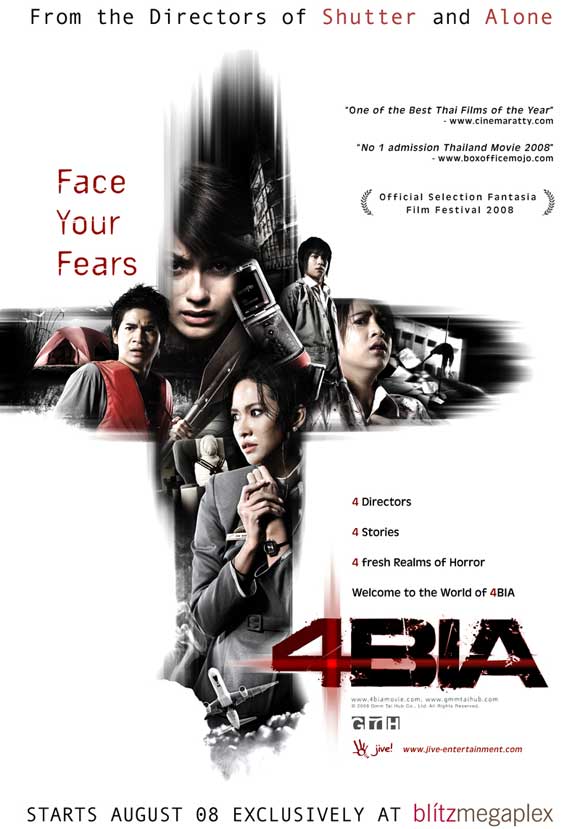 Happiness : A distraught woman, eager to meet other people, desperately answers an anonymous text message and finds out that things can easily get worse. Tit for Tat : A group of teenagers find a manuscript. When they understand it’s doomed, it’s too late ! In The Middle : Four campers are frightening each other with ghosts stories. One of them swears that if he would die, he would come back to haunt the one who would sleep in the middle of the tent. A few hours later, he accidentally drowns. Last Fright : A stewardess only has to take care of one passenger. It’s the corpse of a princess who died of poisoning during the flight. 4BIA is the work of a quartet of talented directors from the land of the infernal chilli pepper. Yongyoot Thongkongtoon’s debut, The Iron Ladies, was the first Thai movie that was a success on domestic and international movie screens. Paween Purijitpanya is a video clip specialist, whose horror movie Body made the box office shiver. Banjong Pisanthanakun and Parkpoom Wogpoom are the co-directors of Shutter ( BIFFF 2006 ), which already got its Hollywood remake, and Alone ( 2007 ). 4BIA is an outstanding horror omnibus whose stories complement and strengthen each other.