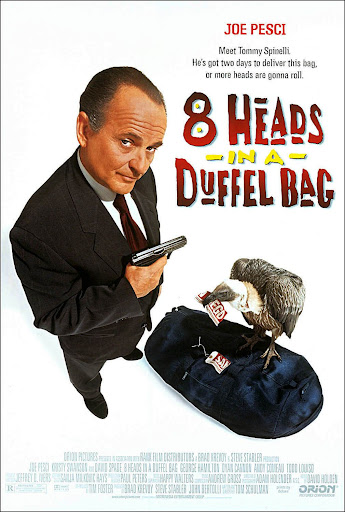 8 HEADS IN A DUFFEL BAG

Career mobster Tommy has been given what for him is a routine task. He must take the evidence of 8 successful hits back to his boss, Big Sep, on the West Coast. Easy! It’s just a matter of Tommy taking a flight to California, carrying the bag of heads with him. Or so he thinks… When Tommy is told by the flight attendant that he must check his large, bulging bag into the hold, he is not a happy man. Even worse, he must sit next to Charlie, a chatty medical student, who wants to talk about his girlfriend, Laurie. Charlie’s going on vacation with Laurie and her parents, who he is meeting for the first time. At San Diego airport, Tommy grabs what looks like his bag, only to discover that it is actually Andy’s. Andy has Tommy’s holdall… and its undesirable contents… but it’s too late for Tommy to swap them back. Andy has already met up with Laurie, her smooth talking father, Dick, and neurotic mother, Annette, and the four are on their way to Mexico.
8 Heads in a Duffel Bag is the frantic comedy debut from director Tom Schulman, Academy Awardwinning screenwriter for Dead Poets Society in 1989. Joe Pesci (GoodFellas, My Cousin Vinny, Casino) stars as the unfortunate mob bagman Tommy. Andy Comeau makes his feature film debut as nerdy student Charlie. Kristy Swanson (Pretty in Pink, Hot Shots) stars as his girlfriend Laurie.