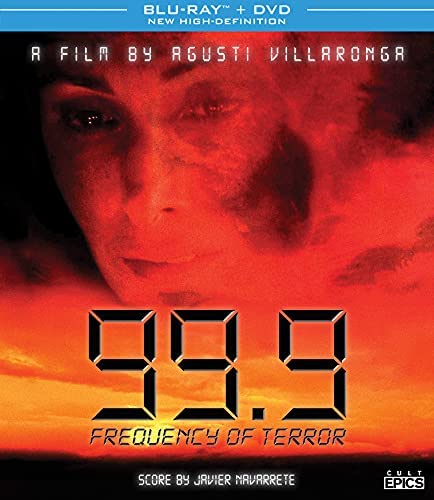 Lara is a call-in radio show host presenting a programme called 99.9, that deals in paranormal phenomena. Through a call to her show, she learns that her estranged lover, Victor, has been found dead; impaled on a cemetery fence located in a small Spanish village. After consulting Victor’s mentor, she learns that he was involved in bizarre experiments searching for tortured souls trapped behind the energy of our every day world. Lara embarks on a quest to find the answer behind his brutal and mysterious demise. She isolates herself in the small town and encounters an ensemble of various characters bent on keeping the secrets of the village hidden. Her search for the truth behind Victor’s death leads her to a strange house where screaming faces seem to form within the stones of the walls, moving about like living creatures. A nightmarish scenario ensues as she is plunged further into insanity, horror and the unknown.
99.9 is the most recent film from renowned Spanish director Agustin Villaronga. In 1985, this former artistic director and film critic made a terrifying debut with his perverse but disturbingly first feature In a Glass Cage. The story of an invalid Nazi doctor’s terrible past being re-created in his home by an insane former boy lover devastated and shocked the art film world. Followed by Moonchild in 1988 and El Andalus in 1992, his latest is a gorgeousy photographed and genuinely creepy film (it has already won two awards for its cinematography). 99.9 seethes in cool blue tones and works a methodical storyline paced like a sexually deviant Agatha Christie mystery. Fans of the X Files will find themselves in familiar thematic territory, but Villaronga’s subversive touch and perverse, morbid fascinations plunge into set pieves that are visually and atmospherically similar to some of Dario Argento’s films like Suspiria and Inferno. 99.9 will teach you that terror, indeed, has a number. With Maria Barranco (Atame, Ardilla Roja, Boca a Boca) as Lara, Terele Pavez (El Dia de la Bestia, Los Santos Innocentes) and Angel de Andres Lopez (Mujeres al borde de un ataque de nervios, Huevos d’Oro).