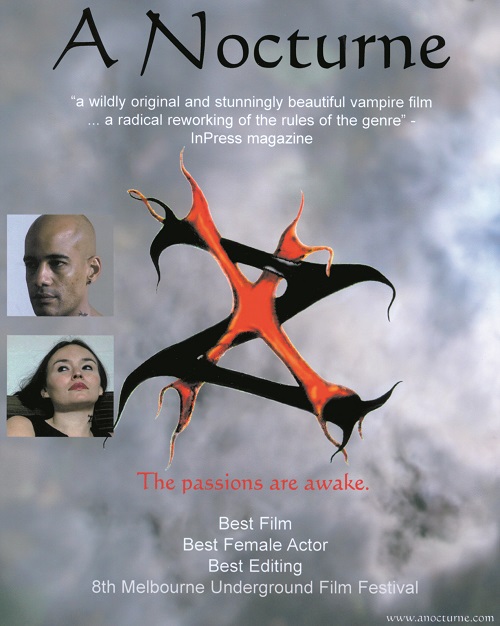 Z and X are a vampire couple, living in an old warehouse in inner-city Melbourne. Over the course of one night, they go about their regular business, teaming up with the poet-cannibal Seers and another vampire Vee. After a strange encounter with the mysterious Rola, the fabric of Z and X’s world begins to change. A Nocturne is a philosophical vampire film by Melbourne-based independent filmmaker Bill Mousoulis. After having directed several acclaimed art-films, Mousoulis has made his first genre film and with stunning results. Just like in Abel Ferrara’s The Addiction, A Nocturne doesn’t focus on stakes, crucifixes or deadly daylight, but radically reworks and subverts the rules of the genre. He presents us with a modern, realistic and recognizable setting. His protagonists are outsiders, people on the edge, struggling with their condition and society. A Nocturne is a wildly original and thought-provoking experience with ingenious visuals, editing and music. Alex Spears and Vanessa de Largie are impressive as the vampire couple, emanating the film’s spirit and ideas by their distinctive, zombie-like gait to their solemn expressions.