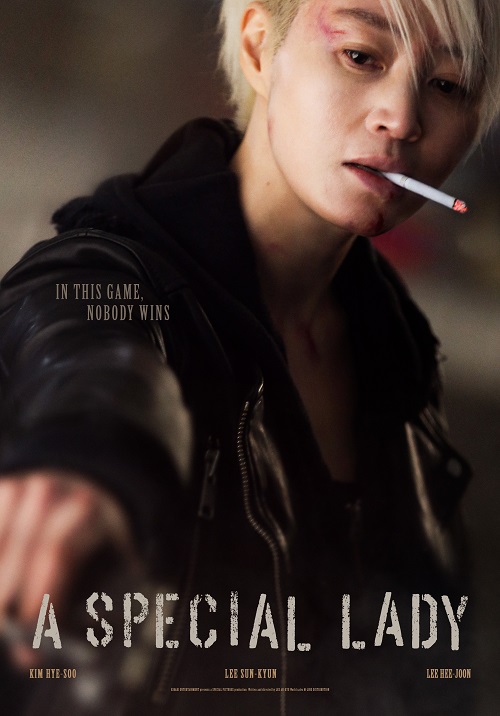 It’s a man’s world, but it would be nothing without a woman. Apply that to Seoul’s criminal underworld and never a truer word was spoken. A crime syndicate specializes in blackmailing prominent citizens by secretly taping their sexual affairs. Platinum blonde Hyun-Jung is the gang’s factotum. She not only advises the big boss but if push comes to shove she also kicks a mean ass and to top things off she has an uncanny sense of looming danger. Just when the syndicate wants to reinvent itself as a bona fide company, its designated killer is no longer willing to play second fiddle, which threatens the whole organization. The boss’s son, who’s just been expelled from school for bad behaviour, doesn’t want to heed her good advice either. And what to do about the public prosecutor, who has vowed to bring the gangsters down because they don’t want to return his sex tape ?

A Special Lady is a hard-boiled crime drama, a genre which the Koreans seem to have monopolized these last 15 years. It boasts enough plot developments to fill ten movies, impressive performances, stylish direction, a pulsating rhythm… Lee An-gyu used to assist Kim Jee-woon (I Saw the Devil, A Bittersweet Life, A Tale of Two Sisters) and now delivers a first feature in his own name. For the leading lady, he succeeded in getting tough cookie Kim Hye-Soo, known for a.o. Coin-Locker Girl.