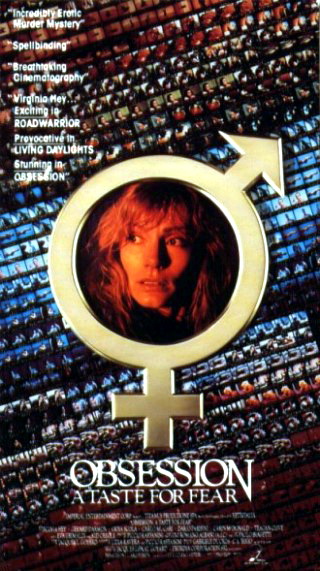 A TASTE FOR FEAR

Obsession: A Taste for Fear takes place a couple of years in the future and deals with photography. Images rule, they control everything, from fashion to human behaviours.
A former model, Diane Thornton, reigns on this photographic world: to take pictures, she uses a computer-connected camera. During her last shots, she went very far to picture brief instants of originality with her models, which made her very famous. Hardly everyone is attracted to Diane, but it seems that she inspires some people to have a passion which leads them to make their worship sublime in a series of particularly wicked sacrifice rituals.
Some girls are found dead, hands and feet tied up, right in front of video monitors which play the recording of their last moments…
According to Piccio RAFFANINI, the movie’s director, Obsession: A Taste for Fear could be described as an erotism-crossed rock thriller where “the real star is the setting, the image in every sense. What’s its main topic? Photorealism – inspired by the RanXerox graphic novel series, in which everything is twisted, even sex.” Piccio RAFFANINI, considered to be the greatest music video director of Italy, managed to gather a seducing cast to support his main star: the character of Diana Thornton, the sensual photographer, is played by Australian model Virginie HEY (The Living Daylights and Mad Max 2), her former husband is played by Gérard DARMON (Betty Blue).
The movie’s cinematographer, Romano ALBANI, had already worked on Dario ARGENTO’s movie, Phenomena.
They are also some background actresses with bodies of the essence, such as a surprising “feminine” athlete able to make Rocky and Conan simultaneously blush!