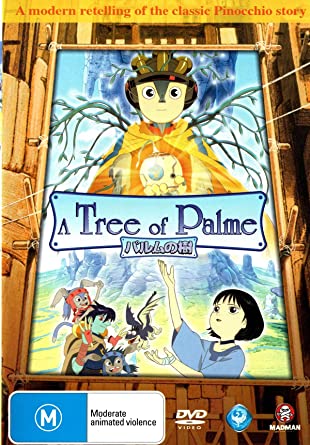 A TREE OF PALME

Ever since the death of his beloved mistress Xian, Palme, a robot made of mystic wood that is said to absorb the very memories of the civilizations it roots in, has lain dormant. One day, he awakens to the presence of a wounded female warrior named Koram, whom he mistakes for Xian. Koram is forced to entrust her mission to him to bring the Egg of Touto, a mysterious artifact, to Tamas, the world below. On his journey to the underground world, Palme meets Popo, a girl with whom he falls in love. Determined at last with a purpose in life and learning of the importance of the artifact he carries through hazardous encounters with its pursuers, Palme resolves to complete his mission and exchange the Egg of Touto for his humanity.

A Tree of Palme could be described as the story of Pinocchio transferred to a world that is equal parts Tolkien and Dante’s Inferno. Director Takashi Nakamura (Catnapped) worked more than ten years on this stunningly beautiful film. He combines impressive 3D backgrounds of a very detailed imaginary world with traditional 2D character design and a spiritual musical score. A Tree of Palme, a feast for the eyes and ears, explores what it means to be human.