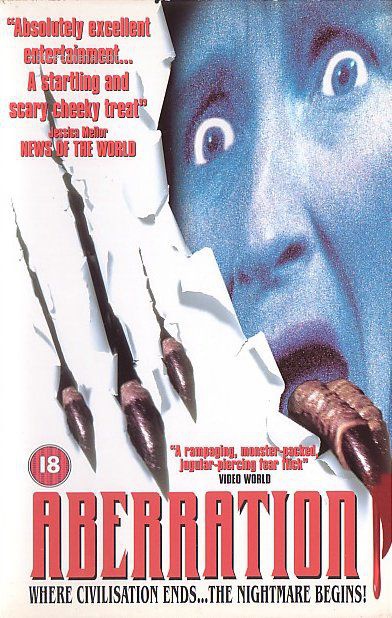 Something is seriously amiss in Langdon, a holiday and fishing resort in mid-West America. Marshall, a local field researcher who has fallen short of his own expectations, is investigating the area’s sudden ecological devastation. Populations of small wildlife are rapidly disappearing and strange, gooey nests are springing up over the countryside. He watches a young woman arrive in town as it’s closing up for winter. Beautiful and street-wise, Amy is seeking refuge where no one will find her and where she can try to rediscover the person she once was. Hiding out in her parent’s old holiday cabin, now dirty and decaying, she realises Langdon is not how she remembered it as a child. It’s mid-winter and a vicious storm is brewing. Alone at night, Amy notices some bizarre occurences: she finds a weird nest in her generator shed and can hear scuttling noises in the rafters. There is something odd, something nasty which is not just eating her cake, but is seriously distressing her cat.
Aberration stars Simon Bossell (Spider and Rose, Hotel de Love) as Marshall, a clever but socally inept young scientist and Pamela Gidley (Liebestraum, Twin Peaks: Fire Walk With Me) as Amy, who has returned to her family’s remote mountain cabin to escape from her dark past. With Tim Boxell making his feature directing debut, from a script by Darrin Oura and Scott Lew and photography by Allen Guilford (Heavenly Creatures, An Angel at My Table).