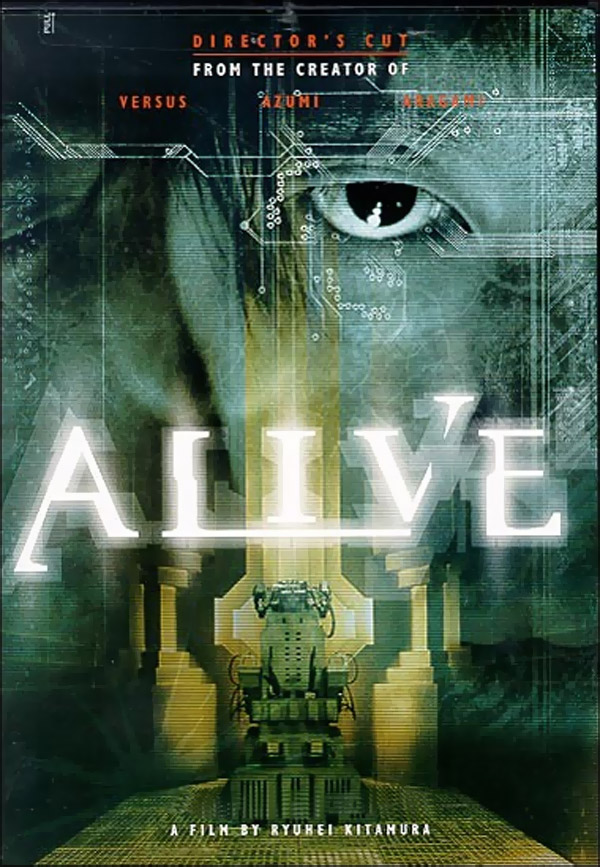 In an act of revenge, Tenshu Yashiro brutally murders the six men responsible for his girlfriend Misako’s rape. He is sentenced to death, but after a failed execution, Tenshu gets another chance. He awakens to find himself in a sealed room with another “lucky” survivor, the psychopathic Gondoh. The two men are now part of a secret government experiment. A team of scientists watches via camera as a power struggle unfolds between the prisoners and The Displacer, a parasite that eats away at its host’s soul until nothing remains but a machine of flesh bent on destruction. The experiment soon becomes a raging battle that threatens not only the lives of all involved, but the survival of humanity itself.

Alive marks the return of Japan’s new action cinema maestro, Ryuhei Kitamura, director of last year’s smash hit Versus. The movie is an advance in Kitamura’s sense of both style and genre definition. He has traded the horror of the undead for an inventive science fiction setting that slowly builds up to an explosive climax. Alive features Versus protagonists Hideo Sakaki and Tak Sakaguchi and Ryo, star of Shinya Tsukamoto’s Gemini, as The Displacer.