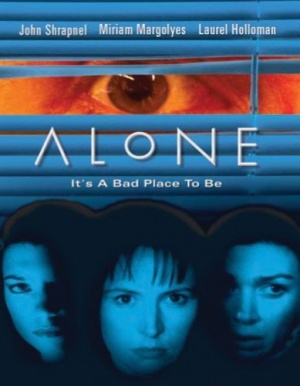 Alex’s parents died when he was just a kid. Since then Alex has been alone, suffering recurring nightmares that only cease when he has a partner. Ill fate and bad luck hound Alex when his girlfriend, Alice, “accidentally” falls backwards down the stairs of her home. Matters are made worse when Alex’s new love, Sarah, “accidentally” chokes to death during a romantic dinner. Charlotte now becomes the love of Alex’s life until she falls into a coma following an “accidental” collision with a vehicle. Alex’s tragic love life becomes an obsession for the seasoned detective, inspector Hannah, who is determined to nail the “psycho” who has left this trail of dead bodies. Alone, a terrifying psychological thriller by young British debut director Philip James Claydon, explores the universal fear of isolation. Producers David Ball and John P. Davies wanted to create a high voltage thriller without any blood. To achieve this feat, they opted for a subjective camera, meaning that the camera became the stalker, constantly accompanied by the head splitting soundtrack of Rick Wakeman (Lisztomania, Crimes of Passion, Creepshow II). Alone represents an assault on your eyes and ears which will not leave you indifferent. With John Shrapnel (Gladiator, Tv’s Hornblower and Inspector Morse) as Inspector Hannah and Miriam Margoyles (Pacific Heights, Babe, End of Days), Laurel Holloman (Boogie Nights) and Isabel Brook (The Mummy, Brian Yuzna’s Faust).