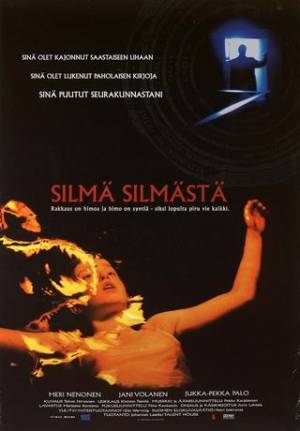 AN EYE FOR AN EYE

Kiia, a young sculptor who derives her inspiration from her own tortured mind, receives an invitation from Salo, the young priest of her home village Devil’s End. This small town, situated in the remote backyards of Northern Finland, suffers from depopulation. Salo would like her to design two fierce sculptures for the church, an angel and a devil. The villagers hope that her shocking statues will bring tourists to this former sectarian town. Kiia starts working on them in her old home in the middle of the forest. The locals avoid the house because they think the place is haunted. The dark shadow of Kiia’s father still lingers over the village. He was a narrow-minded and very conservative priest who drove a young and devout girl to her suicide. When the villagers found out, they got furious and lynched him. As Kiia is sculpting the figures, she unintentionally calls up the dead. An Eye for an Eye is a Finnish horror film by Atro Lahtela. Besides trying to scare us, Lahtela has also stuffed his film with dark and absurd humour. His main theme is very familiar : the secret past of our loved ones. It’s very human to try to lock evil secrets away, but as we know from countless other movies, it always comes back with a vengeance. An Eye for an Eye is a gothic scarefest that suggests that it’s better to face the past than to hide away.