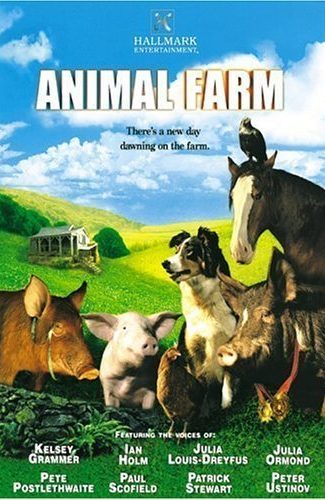 Unhappy with the poor living conditions they must endure from their negligent, drunken owner; Mr. Jones, the animals of Manor Farm gather for a secret meeting to plan a revolt. Major, the wise old pig tells them that humans are the source of their misery and teaches them an anthem that celebrates rebellion against human control. A few months later, when the yoke of Mr. Jones has become intolerable, two pigs, Snowball and Napoleon, lead the animals in a revolt that chases Mr. Jones and his wife of the farm. The animals are now in charge. Snowball changes the sign on the gate to read “Animal Farm” and paints the commandments of “animalism” on the side of the barn. The prime commandment reads “All Animals are Equal”. But soon the desire for power and other traits they had despised in their original owners start to show in the animals now running the farm. All animals might be equal, but some animals are more equal than others…
Animal Farm is a thrilling live action animation adaptation of George Orwell’s famous allegory on the nature of dictatorships. First-time director John Stephenson delivers a clear message : power corrupts and revolutions always devour their own children. With Pete Postlethwaithe (In the Name of the Father) as Mr. Jones and the famous voices of Patrick Stewart (Star Trek), Julia Ormond (Legends of the Fall), Kelsey Grammer (Frasier), Ian Holm (ExistenZ) and Peter Ustinov (Spartacus).