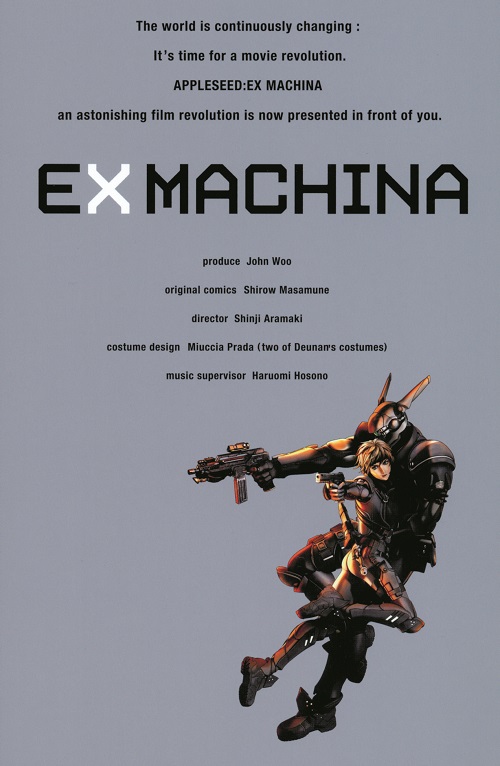 Following the non-nuclear war that killed half the world’s population, the city-nation of Olympus stands as a bacon of hope in a world of chaos and conflict. The utopian metropolis is governed by Gaia, a vast artificial intelligence, and administered by genetically engineered humanoids known as Bioroids, whose designer dna suppresses strong emotions. With Bioroids making out half of its population, peace and order are easily maintained. Deunan, a young female warrior and Briareos, a veteran cyborg-soldier, are both partners and lovers. As members of Eswat, the elite special forces serving Olympus, they are deployed wherever trouble strikes. The two fighters find their partnership tested in a new way by the arrival of a new member to their ranks, an experimental Bioroid named Tereus. At the same time, Olympus finds itself under a stealth attack by a mysterious cabal of scientists intent of imposing their own version of world peace. Cyborg terrorism, deadly nanotech, fanatical zealots and a healthy dose of cyberromance are the ingredients to Ex-Machina, the third feature derived from Masumune Shirow’s highly popular manga. Arriving with the heavyweight attachments of producers John Woo and Terence Chang, Shinji Aramaki’s action-packed pic guarantees a visually astounding and emotionally engaging piece of first class anime. The soundtrack features a host of electronica well-knowns, including Yellow Magic Orchestra alumni Haruomi Hosono and Ryuichi Sakamoto.