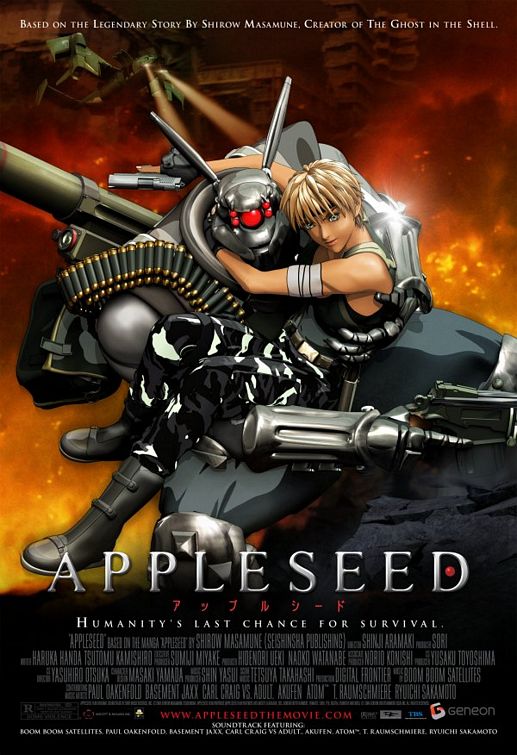 The year is 2131 and Deunan Knute, a hi-tech feminine fighting machine, roams the scorched earth of a planet ravaged by war. With her communication lines severed, she seems unaware that the fighting ended long ago, until she is knocked out and picked up by her former boyfriend Briareos. He takes her to the gleaming metropolis of Olympus, where he now lives with the flawless Hitomi. All but completely destroyed in action, Briareos has been reconstructed as a cyborg and no longer feels as much as a glimmer in his metallic loins for his former lover Deunan. Meanwhile, behind the apparent calm surface of Olympus, mysterious conspiratorial shadows are looming. Based on the popular manga by Masamune Shirow, whose work was also adapted by Mamoru Oshii with Ghost in the Shell and Innocence, Appleseed presents a landmark in animation technique. The motion-captured characters move with quicksilver fluidity over a succession of intricately designed CG backdrops. This is no surprise, as debut director Shinji Aramaki was responsible for the special effects in features such as the Garasaki series, Ping Pong and Astro Boy. Add to this the theme of human- cyborg duality and you’ll discover another highlight of cyberpunk anime.