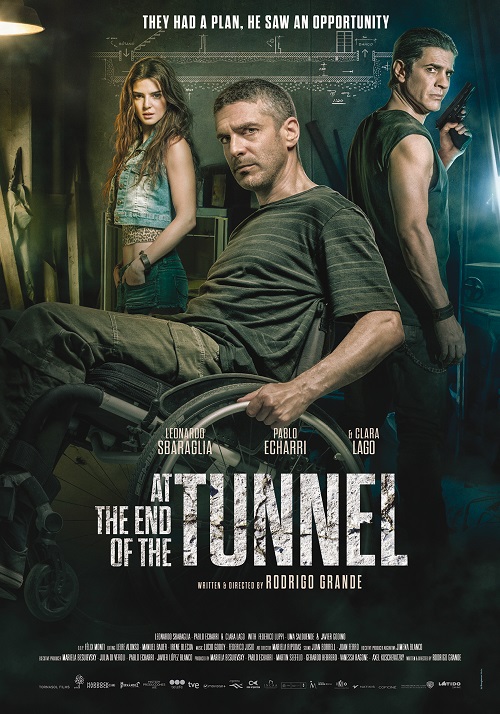 AT THE END OF THE TUNNEL

Chained to his wheelchair, Joaquin leads a solitary life in a huge house in Buenos Aries. He has a dying dog and lots of debts. We don’t have to mention that Joaquin isn’t exactly a very cheerful guy. This doesn’t stop the delicious stripper Berta from wanting to rent the upper floor of Joaquin’s house for herself and her daughter Betsy. Joaquin realises he has to do something before the tax man comes knocking on his door and accepts the young mother’s offer. While Joaquin is cultivating his misanthropy in his basement, he starts hearing voices coming from behind the cellar walls. Curious by what he hears through a cheap stethoscope, he develops a spy system by placing camera’s in the wall. He discovers that a gang of thieves is digging a tunnel to rob the bank on the other side of the street and this tunnel is right beneath his cellar! Rodrigo Grande’s latest thriller is a bit like the cinematographic equivalent of a sauna: you’ll sweat bucket-loads of tension, but you’ll come out revived! This masterpiece brings together the talent of Federico Luppi (Chronos), Leonardo Sbaraglia (Wild Tales) and Clara Lago (The End, BIFFF 2013) and is very generous with its references (The Maltese Falcon, The Great Escape). It certainly didn’t steal its reputation as an Argentinian box-office hit.