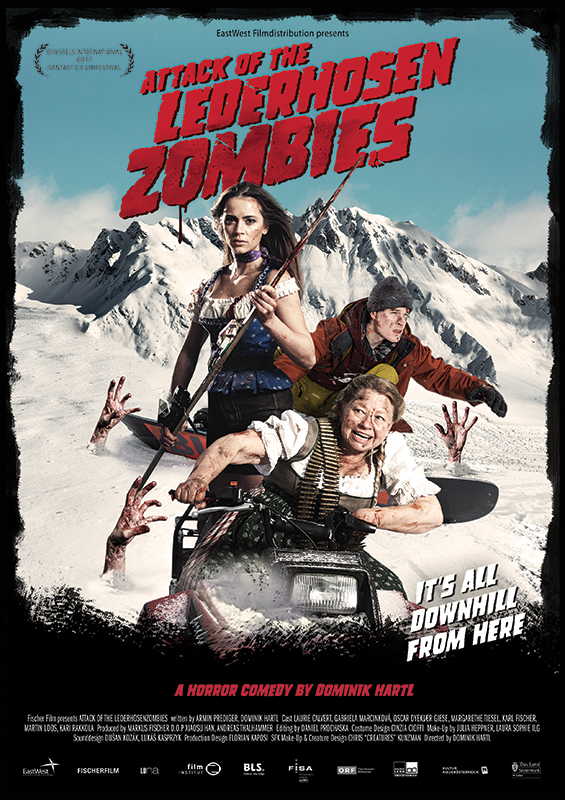 ATTACK OF THE LEDERHOSEN ZOMBIES

Steve, a young professional snowboarder, ruins a high-paying photo shoot by playing a silly prank. He, his girlfriend Branka and fellow snowboarder Joschi are left behind on the mountain. They seek shelter in an après-ski tavern that is hosting an all-night party. Things go from bad to worse when a scientific experiment unleashes an epidemic of zombies and mutant wildlife. This is mostly lost on the local drunkards, as they are not always easy to distinguish from zombies themselves. But Steve, Branka and Joschi have to find a way to survive this hellish night.

Apparently director Dominik Hartl got the idea for his film (of which the title tells you everything you need to know) by observing drunken tourists at the after-ski parties in the snow resorts of the Alps. And the result is a whole lot more than a joke taken too far. Attack of the Lederhosenzombies finds inspiration from illustrious predecessors such as Shaun of the Dead and Braindead and had the special effects team of The Hunger Games at its disposal for the necessary guts and gore. Ever wanted to see Heidi literally yodeling her lungs (and intestines) out? Then this is the movie for you!