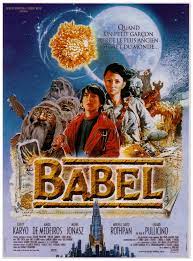 Babels and humans lived in harmony, until the day Mankind asked the Babels to build a tower high enough to reach Heaven. Once completed, they placed at the apex a powerful crystal : the Babel stone. Angered by this arrogance, the Creator scattered mankind accross the Earth, forever condemned to speak in many different tongues. The Babels were banished to underground darkness and charged to protect the Earth from Mankind’s destructive nature. The Babel’s task becomes more perilous at each eclipse of the moon, for that is when the Babel Stone becomes visible once more. In the wrong hands, its untold malevolent power could be unleashed on the world. The escalation of conflicts around the world, the destruction of the environment and the explosion of voices competing to be heard in the media create clear connections with the apocalyptic account of the Tower of Bable. Gérard Pellucino, who also wrote the screenplay and composed the music for his long feature film debut, has used this famous legend to create an engaging coming-of-age story which would bring a message of hope for humanity. Among the cast we find Tchecky Karyo (Nostradamus, Nikita, Crying Freeman), Maria de Medeiros (Henry and June, Pulp Fiction, Les Milles Merveilles de l’Univers) and singer actor Michel Jonasz (Rien ne va plus, Le testament d’un poète juif assassiné).