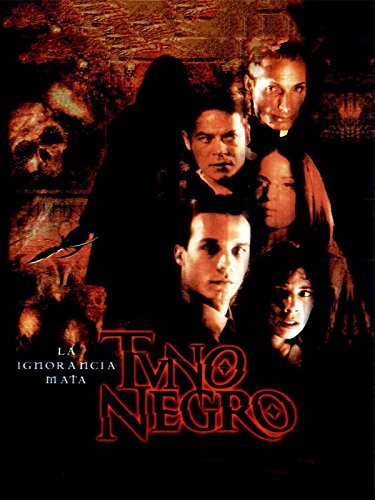 At every Spanish university you’ll be able to find “tunas”, an ancient tradition of student music associations that has survived since the 13th century. The historical city of Salamanca is no exception to this. The nights are alive with the sounds of young students singing and dancing. Now a psychopathic killer has infiltrated a tuna. He chooses his victims on the Internet and then kills them off, one by one. He is the definitive solution to the overcrowding of Spain’s university system. Alex, an art history student, has come to Salamanca to complete her degree with a thesis about cathedrals. When the murderer starts killing all her friends, she has to track down the killer using her knowledge of art history to decipher the clues. She gets help from Victor Veiga, a trainee policeman hooked on Internet-based-technology. The baroque university city of Salamanca proved to be the ideal setting for Black Serenade, a horrific slasher by debut directors Vicente J. Martin and Pedro L. Barbero. They exploit the sinister nightly atmosphere, the tortured constructions and the labyrinth- like streets to instil a feeling of claustrophobia that quickly leads to paranoia. For their two main leads, Martin and Barbero could count on the performances of two of the biggest stars of the Iberian peninsula, Silke (Tierra) as Alex and Fele Martinez (Tesis, Abre los Ojos, El arte de morir) as Victor Veiga.