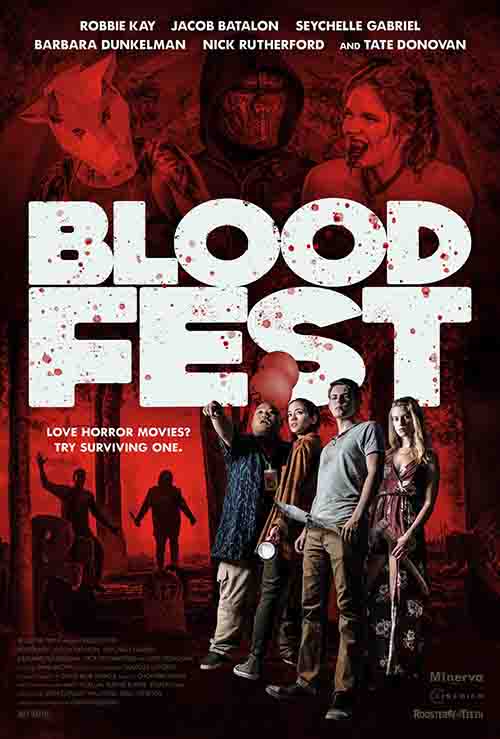 Dax is a horror fan in heart and soul, despite his dark past due to his mother’s bloody murder. With his dorky friend Krill and his will-they-or-won’t-they girlfriend Sam, he decides to go to Bloodfest, the biggest horror festival of all time. At the last moment and against his father’s will, he gets hold of a ticket. They arrive just in time because at sundown the gates will close until dawn… The somewhat peculiar MC Walsh declares the festival to be “the horror to end all horror”. The fans expect a total immersion in the genre, with all its clichés and characters. But before Dax and his friends realize it, they find themselves in the middle of a real horror film complete with zombies, vampires, clowns, dolls, and chainsaws. While trying to find a way out of this nightmare, Dax slowly realizes that he’s more involved than he initially thought. With BLOODFEST, Owen Egerton directs an ode to the great films of the horror genre. All the clichés take their turn on the screen. Egerton himself plays Walsh and Robby Kay, known for HANNIBAL RISING, impersonates the main character, Dax. BLOODFEST is funny, violent, bloody, and straightforward, with enough plot twists to keep you glued to the screen.