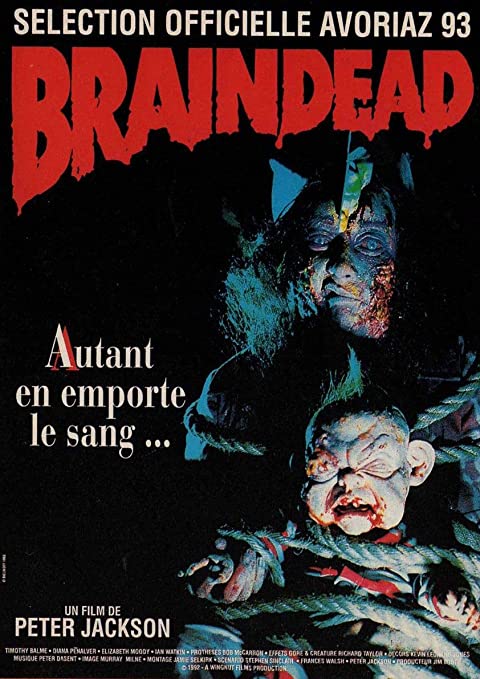 In the lost jungle of Sumatra, a zoologist captures a strange animal, a hybrid creature between a monkey and a rat. This sacrilegious act focuses the fury of an indigenous tribe on him. A wild pursuit then begins and ends tragically for our reckless explorer. Meanwhile, in a small town in New Zealand, the poor Lionel struggles with his old mother, who is so possessive that he has to arrange secret dates with the beautiful Paquita. One evening, during one of these clandestine dates, the two lovers meet at the zoo. While spying on them, Lionel’s mother is bitten by the demonic monkey-rat that happened to be wandering there. Lionel takes her home. Her wounds explode, covering the wall with a purulent liquid. The old lady quickly turns into a zombie and develops an excessive desire for human flesh. Anyone who approaches her will pay the price, starting with her nurse and the priest who came to administer the Anointing of the Sick. After BAD TASTE and MEET THE FEEBLES, the New Zealander king of gore, Peter Jackson, is back with BRAINDEAD. As expected, hemoglobin and bad taste are more than present. Blood, pus, puke and other liquids squirt everywhere, thanks to the work of Richard Taylor, the special effects director. As always with Jackson, second degree parody and clichés are not lacking: starting from the parody of INDIANA JONES to an ending worthy of an ancient tragedy. But BRAINDEAD is not only a masterpiece of the splatter genre: it also offers a very funny, if not caustic, view of the contemporary New Zealand society. The film won the Grand Prix at the Avoriaz and Porto Festivals in 1993.