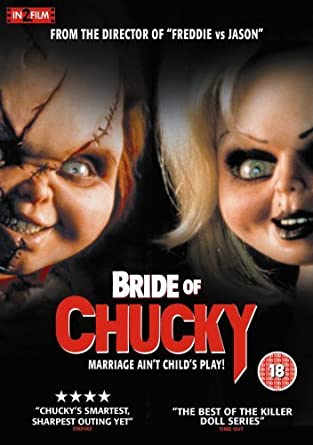 Chucky, the former serial killer Charles Lee Ray whose spirit was mystically transferred into a doll at the moment of his death, is literally resurrected from the evidence morgue in a heist engineered by his ex-girlfriend Tiffany. Stitching and sampling the remnants of the doll together in her mobile home, she invokes a voodoo chant and the smart-mouth Chucky is back in the sort of lethal business he engaged in as a flesh-and-blood felon. However, the reunion with Tiffany quickly shows signs of strain. Chucky doesn’t want a girlfriend ten times bigger than him. Realising that her dreams of a cosy little family are out of the question, Tiffany starts to use brute force to keep her Frankenstein doll under her thumb. But you can’t keep a good psycho puppet down. While Tiffany is taking a bubble bath, Chucky pushes in a radio and fries his former ex. He repeats the chant that transferred his soul into a doll, placing Tiffany’s spirit into a bridal figurine. Now two puppets with an excessive taste for blood are about to be set loose on the world.
Thank the Gods that Wes Craven’s Scream gave new life to scary movies with its nineties injection of black humour, hipness and horror. Now the notorious Child’s Play series, which had run a bit out of ideas and inspiration, is back on the big screen. Bride of Chucky is part horror, part comedy, part romance and part road movie. Hong Kong director Ronny Yu (The Bride with White Hair, Warriors of Virtue) accentuates the tongue-in-cheek elements of Don Mancini’s screenplay and provides an energetic style for this flight of fantasy. Avoiding easy campiness for a mix of cynicism and shock, Bride of Chucky has the good sense not to take itself very seriously. This cool blend of the genuinely creepy and the really funny, is brought with gusto by a enthusiastic cast of actors. Oscar nominee Jennifer Tilly (Bullets over Broadway, Liar, Liar) plays Tiffany, the over-the-top girlfriend of Chucky, whose voice comes, as usual, from Brad Dourif (Dune, Death Machine, Alien 4). Nick Stabile and Katherine Heigl (Prince Valiant, My Father, the Heroe) play a young trailer trash couple who are fortunate enough to be neighbours to the demonic dolls. John Ritter (Stay Tuned, It came from the Sky) is a nosy cop hot on their trail.