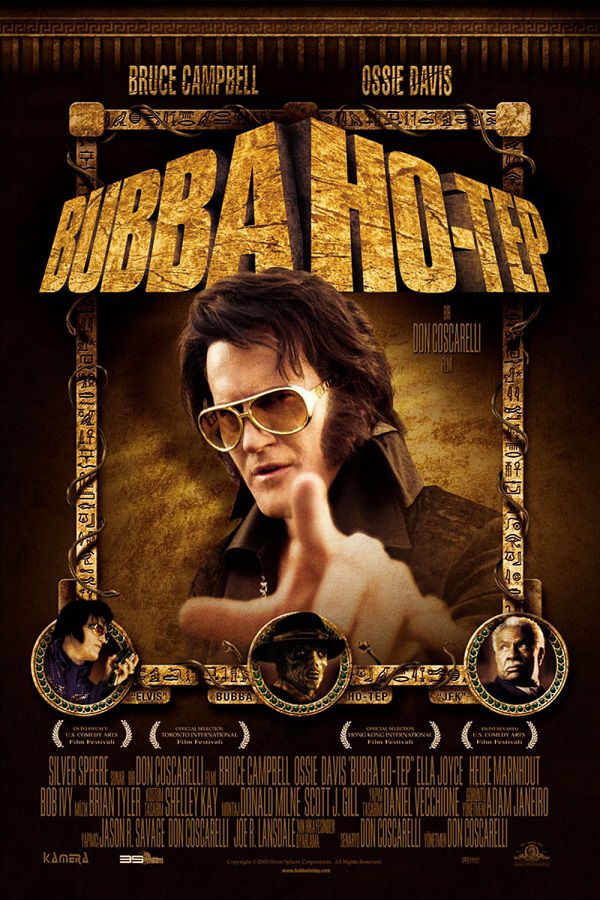 Elvis Presley wants to get away from stardom. He secretly selects a double to take his place and hides out in a trailer park, posing as an impersonator of himself. However, the evidence of his switch goes up in flames and one gyration too many pops his hip and sends him into a coma. Many years later, the King’s sideburns are grey and he has a cancerous sore on his member. He languishes alone and forgotten in a Texan home for the elderly. Making matters worse, blood-thirsty scarab beetles buzz in the corridors at night and an ancient mummy is sucking the souls from residents. Elvis teams up with a wheelchair-bound resident who believes he’s JFK. Together, they devise a plan to blast the Egyptian monster back to the sands from which it came.

Bubba Ho-Tep is a captivating blend of sharp comedy, old-fashioned monster movie atmospherics and genuine heart. Written and directed by Don Coscarelli, the wicked mind behind the surreal horror of the Phantasm films, Bubba Ho-Tep not only kicks undead ass, but also deals with regret and ultimately finding redemption. Cult-actor Bruce Campbell (Evil Dead) gives a truly inspired performance as the aging Elvis, assisted by the wonderful Ossie Davis (Do The Right Thing) as his wheelchair sidekick.