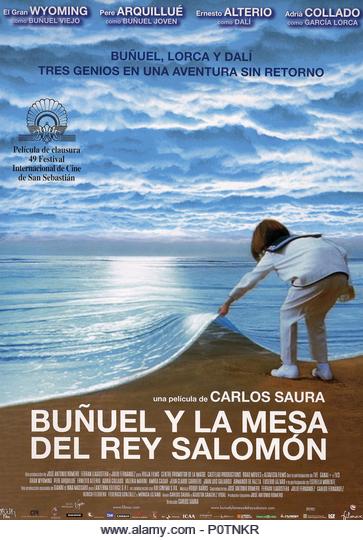 The old film director Luis Bunuel closes his eyes and begins to imagine the film he would liked to have made about his youth in Toledo, together with his friends, the poet Frederico Garcia Lorca and the painter Salvador Dali. In the underworld of Toledo, they go in search of the mythical Table of King Solomon, for centuries disputed by Jews, Christians and Muslims. Whoever finds it, will have the power to see the present, the past and the future. With Bunuel at the fore, the young heroes enter a game of intrigue. The search for the Table becomes a magical quest in which their friendship will help them to deal with many strange phenomena and mythical characters that they will encounter during their journey. Acclaimed Spanish filmmaker Carlos Saura (Bodas de sangre, Carmen, Goya in Burdeos) wanted to pay tribute to Luis Bunuel, the renowned grandmaster of cinematic surrealism, with a fiction film in which Bunuel plays the starring role. Together with author Agustin Sanchez Vidal, Saura wrote a screenplay about a world of wonders, mysteries, fantasies and Chinese boxes. By exploring the many corners of Bunuel’s mind, Saura reveals the true identity of this brilliant artist. El Gran Wyoming (El dia de la bestia, Muertos de risa) and Pere Aquillué respectively play old and young Bunuel. Ernesto Alterio (Los lobos de Washington) incarnates flamboyant Salvador Dali and Adria Collado (El arte de morir, The Heart of the Warrior) plays passionate Federico Garcia Lorca.