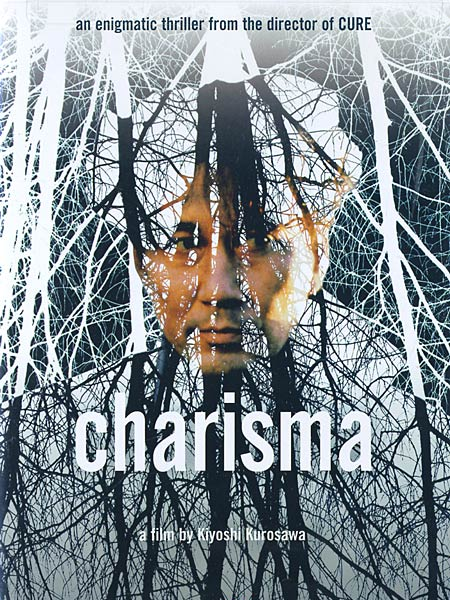 Hostage negotiator Goro Yabuike blows a big case and is sent on a forced holiday to a forested area. He soon encounters Charisma, a single tree surrounded by strange, almost altar-like objects. The tree exerts a powerful force on everything around it, including the scorched barren land in its vicinity. The local residents are locked in battles around the tree’s destruction or protection. There’s Kiriyama, a young man living in a sanatorium. Mitsuko Jinbo, a Lois Lane-like botanist, claims the tree secretes the most destructive toxin imaginable. And then there are brutish lumberjacks and rapacious plant collectors, who are all seeking a piece of Charisma at any cost. Yabuike encounters them all and learns more and more about the tree. When, like any good policeman, he decides to act on his information, the tree shows it still has a trick or two up its sleeve. Kiyoshi Kurosawa’s (not related to…) latest film could best be described as an environmental thriller in which the villain is a tree. Like Cure (presented at the 16th Festival), it speculates on ways that the human will is thwarted by elements outside of rational control. And like his yakuza films, it asks to what lengths a man will go for his imagined duty. Acclaimed actor Yakusho Koji (Juzo Itami’s Tampopo, Shohei Imamura’s The Eel) plays Goro Yabuike, the policeman who has to unravel the web that Charisma has woven over the forest and its inhabitants.