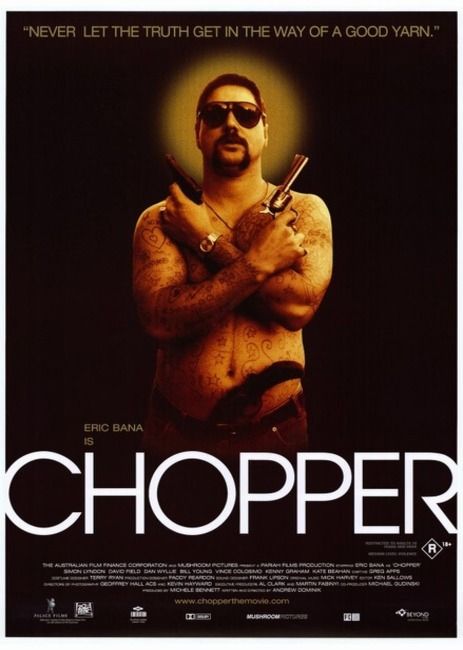 Mark “Chopper” Read bungles his childhood dreams of becoming a legendary crime figure by landing in a maximum-security prison for a failed kidnapping attempt. There he works hard to establish himself at the top of the prison power hierarchy through extraordinary erratic behaviour, alternately violent, affectionate and self-destructive. Physical brutality, lies, rationalisations and distortions comprise his modus operandi. Released from jail eight years later, he is determined to continue his pursuit for criminal notoriety, whatever the cost might be to himself or to others. Chopper is a great first feature for acclaimed music video director Andrew Dominik. The film explores the darkest realms of Australia’s underworld through the eyes of one of his most feared and infamous criminals. It’s based on the real life of Mark “Chopper” Read. You never know if what you see is what actually happened, because the real Chopper himself, a vivacious raconteur, is always willing to sacrifice the truth for a good story. The temporal periods in the film are distinguished not only by Chopper’s physical changes, but also by shifts in colour tone from the cold blue stone of the prison to the saturated reds of the brothels and bars of the outside world. To top it off, Eric Dana, one of Australia’s most celebrated stand-up comedians, plays this notorious character with charismatic energy backed by complex psychological insight.