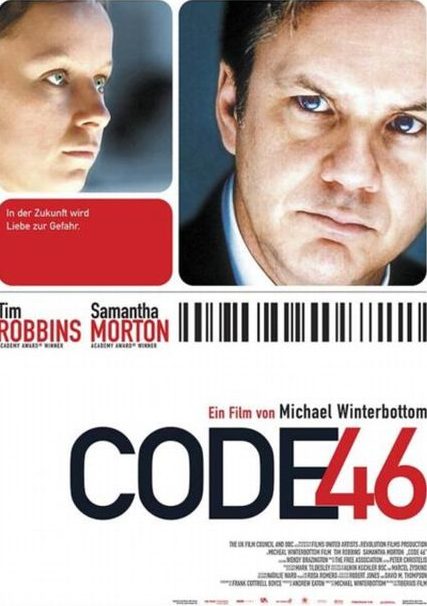 The near future. William is sent to the sprawling metropolis of Shanghai for 24 hours to investigate a fraud at the Sphinx Insurance Company. Having taken an empathy virus, he’s able to read suspects’ minds. Maria in an employee of Sphinx where she creates “papelles”, a form of insurance cover, passport and visa rolled into one. Without papelles, people are consigned to live in sub-cultures, unable to travel outside their own zones. William’s enquiries soon reveal that Maria has been selling fake papelles. He knows it’s his duty to turn her in. Instead, he falls deeply in love with her, a move that will change his life forever.

Code 46 is a visionary sci-fi story about two people struggling to survive in the chaos and disorder of the new world. Versatile British filmmaker Michael Winterbottom (Welcome to Sarajevo, The Claim, In This World) uses the deserts of Arabia and the hypermodern skyline of Shanghai as a convincing set for a film that forces us to think about a new and disturbing world that is rapidly taking shape. William and Maria, the two star-crossed lovers are played by Tim Robbins (The Player, Dead Man Walking, Mystic River) and Samantha Morton (Minority Report, In America).