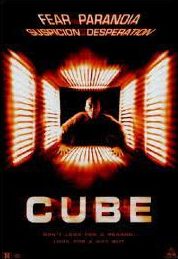 Six ordinary strangers awaken from their daily lives to find themselves trapped in a surreal prison, a seemingly endless maze of interlocking cubical chambers armed with lethal booby traps. There’s Quentin, a cop, Rennes, a professional thief, Leaven, a student math wiz, Holloway, a psychologist, Kazan, an autistic adult and Worth, who claims to be one of the designers of the cube but has no idea about its purpose. This assortment of individuals seems random, even perverse. None of these people know why or how they were imprisoned. They are forced to find their way out. The deadly traps are as lethal as the threat of starvation and the mental dangers of paranoia, prejudice and egoism. Unanswered questions pop up on every side. Who created this diabolical maze, and why ? It soon becomes clear that each of them has a skill that could contribute to their escape. But tension rises and conflicts and struggles for power start to emerge. One thing is crystal clear : unless they learn to co-operate to work out the secrets of this deadly trap, none of them has very long to live.
Cube, a cross between a classic Twilight Zone episode and a balls-out early George Romero Shocker, is the spellbinding first film of Canadian Vicenzo Natali. Shot in less than a month on a single set in a Toronto warehouse and with a cast of high-energy actors, Cube proves that the spirit of edgy low budget genre cinema is still very much alive and well. Natali’s film extends the theme of an earlier short, Elevated, about three people under threat in a jammed lift. He has compared the experiences of his characters to those of ants “living in a world of giants, never understanding the forces that push and pull them through life”. And since there are no clues whatsoever about the origin of the Cube, its purpose or designs, the audience itself starts to feel like a seventh pawn in a fatal game. Unsettling, exciting and fascinating, Cube was honoured as “Best Canadian Feature Debut” at the 1997 Toronto International Film Festival. Now you‘ll be able to feel just as trapped as those protagonist on the big screen, desperately wanting to escape while knowing that death may lay in waiting behind every corner.