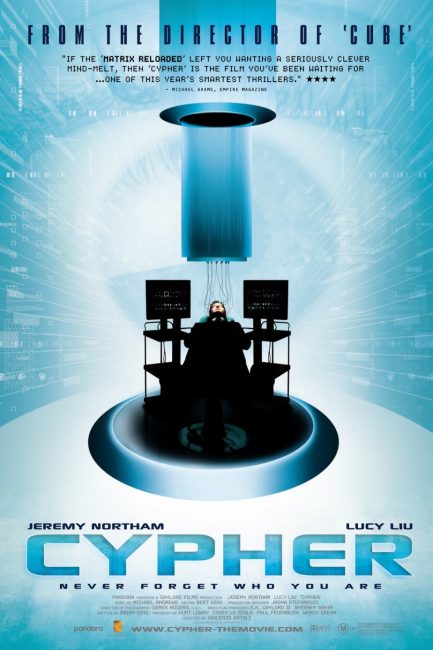 Morgan Sullivan is an out of work accountant who is stuck in an unhappy life in the suburbs and a miserable marriage. Seeking an escape from this lacklustre existence, he joins the multinational corporation Digicorp to become a company spy. Adopting a new identity, he is sent to spy on various trade conventions where he secretly records the proceedings and transmits the information to Finster, his ruthless, intimidating corporate boss. On assignment, Morgan encounters the elusive and beautiful Rita, who reveals to him that Digicorp’s activities have been a ruse to brainwash him and others like him. With some hesitation, Morgan accept her offer of anti-brainwashing drugs and is ultimately forced to work for Sunways, a rival company. As a double agent, Morgan has difficulty distinguishing reality from the visions that plague him. His world has become a quagmire where the lines are blurred and where charades and dreams become truths.

Vincenzo Natali, director of the award-winning Cube, is back with a exciting sci-fi story that plays at will with the boundaries between reason and madness, dream and reality. Cypher is a hybrid of different genres but at the same time carefully constructed as a tight, well-thought-out thriller. Starring Jeremy Northam (The Winslow Boy, The Net) as Morgan and Lucy Liu (Charlie’s Angels, TV’s Ally McBeal) as Rita.