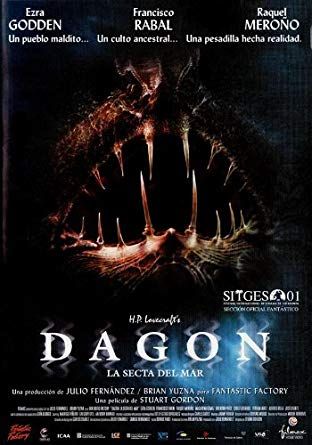 Paul and his lovely girlfriend Barbara are celebrating the success of their new dot.com company with Howard, their wealthy investor and Vicki, his glamorous jet-set wife. The four are enjoying a vacation on Howard’s two-mast yacht off the Galician coast of Spain. Their idyll is shattered when their sailboat crashes on a reef, trapping Vicki below deck. Paul and Barbara must go to the nearest town for help. The decrepit fishing village Imboca at first seems deserted, but unblinking eyes peer out from the boarded-up houses. The strange inhabitants offer little help, and when Paul finally convinces two fishermen to return to the sailboat, he discovers that Howard and Vicki have vanished. It won’t be long before Paul and Barbara will have to face Imboca’s dark secret : Dagon…. From fantasy veterans and festival favourites producer Brian Yuzna (Return of the Living Dead 3, The Dentist, Progeny), director Stuart Gordon (Re-A nimator, Fortress, Space Cowboys) and screenwriter Dennis Paoli (From Beyond, The Pit and the Pendulum) comes this spine-chilling adaptation of a story by the 19th century grandmaster of horror, H.P. Lovecraft. Starring talented newcomer Ezra Godden (Tv’s Band of Brothers) as Paul, television star Raquel Mereno as Barbara and the late le-gendary Spanish actor Francisco Rabal (Viridiana, Belle de Jour, Goya in Bordeaux). The special effects are courtesy of Spain’s leading SFX firm DDT (The Nameless, The Heart of the Warrior, The Devil’s Backbone).