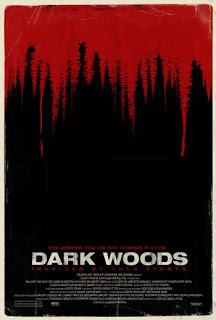 Gunnar, a Norwegian TV producer, is planning a extreme reality TV show. He assembles a youthful team to work with him, but insists that they join him for four days on a teambuilding survival course deep in the forest to see how they cope with stress. The four are Lasse, a gentle guy who likes to phone his mother every day; Elin, a Swedish girl who has worked with Gunnar before; Per, a boastful technician, and the sultry Sara. They journey to a dilapidated cabin by the lake to begin their training course, but soon strange things start to happen. After finding an abandoned tent, they discover the naked body of a woman in the lake and become aware that a shadowy figure is prowling near the cabin. When one of the group is found murdered, the scared and paranoid survivors turn against each other.
Dark Woods is a nerve chilling Norwegian thriller from debut director Pal Oie, that combines a ghost story with a creepy thriller and a backwoods slasher. He manages to create plenty of atmosphere, using simple things to create creepy scenes. The fine cast is headed by veteran Bjorn Floberg (Insomnia, I Am Dina, Kitchen Stories) as Gunnar.