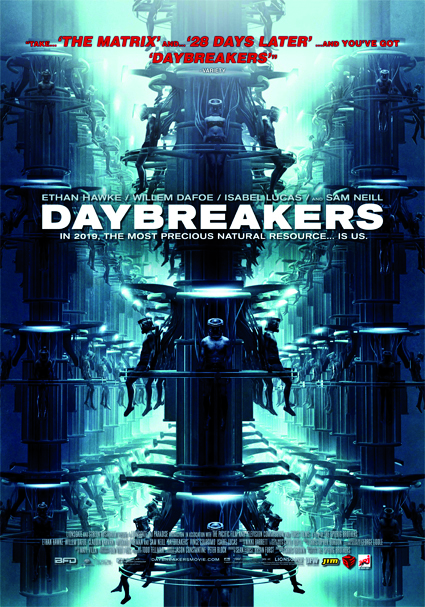 2019, a virus has transformed 95 % of the population into vampires. All of society has been reorganized to allow a nocturnal existence, while avoiding daylight. But a serious crisis threatens its very existence. What remains of humanity has almost been hunted to extinction. Blood has become a rare and expensive commodity. Those who cannot obtain it, degenerate into fierce, primitive creatures. Edward Dalton works as a haematologist for Bromley Marks, the multinational that controls the international blood supply. Dalton desperately tries to find an artificial blood replacement to avoid the coming catastrophe. When he meets one of the few surviving humans, he makes an astounding discovery. In 2004 the Australian brothers Peter and Michael Spierig made quite an impression at the BIFFF with their extraterrestrial zombiefest Undead. Six years later they strike even harder with a stylish, visually impeccable futuristic vampire thriller. Daybreakers is a smart and refreshingly original big budget spectacle. We finally get an answer to the question that is haunting so many genre lovers : if vampires would take over the world, how in the hell would they survive without human blood ? Lets also not forget all that assembled acting talent, with fangs or without : Ethan Hawke ( Gattaca ), Sam Neil ( The Piano ), Claudia Karvan ( Star Wars III ) and Willem Dafoe ( Spiderman ).