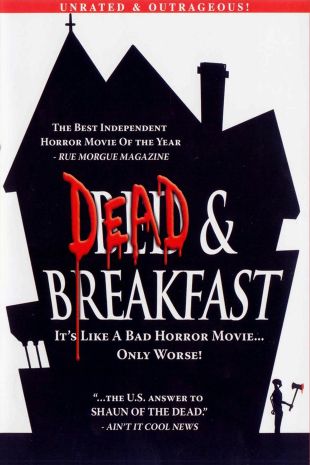 Six friends on their way to a wedding in Texas stop for the night in the sleepy town of Lovelock. The kind and generous owner of the local inn welcomes them with open arms, but they don’t get along so well with the rude in-house chef. When morning comes, both the inn owner and the chef are found dead. The local sheriff suspects the gang of murder and tells them not to leave town. The mystery quickly unravels when the already bizarre residents of the town become possessed by an evil spirit and pin down the friends at the Bed & Breakfast. Armed with a rusty old chainsaw, a can of gasoline and half a box of shotgun shells, it’s time to barricade the house and fight for their lives. After debuting with the darkly funny Road Kill and combining romance and humor in This Space Between Us, young director Matthew Leutwyler surprises us with the entertaining zombie comedy Dead & Breakfast. Key ingredients are truckloads of fake blood, rapping zombies, dead beavers bought from eBay, lots of winks to the Evil Dead series and a fine young cast, headed by Jeremy Sisto (Six Feet Under), Gina Philips (Jeepers Creepers, Jennifer’s Shadow) and Erik Palladino (E.R., U-571). David Carradine (Kung Fu, The Long Riders, Kill Bill) plays the inn owner.